Hanoi FC were crowned champions of the V-League 2022 following a two-goal margin victory against Hong Linh Ha Tinh on November 13.

Hanoi Football Club (Hanoi FC) clinched the V-League 2022 title one round ahead on November 13 after beating Hong Linh Ha Tinh by two goals on November 13.

Hanoi FC, hosting the underdogs at the Hang Day Stadium, took control of the match from the beginning and created many clear-cut chances.

Hong Linh Ha Tinh had a few opportunities, but their players failed to score into Hanoi FC’s net.

The dominance of Hanoi FC in the game was then realized with the two goals scored by Lucao do Break in the 27th minute and Tran Van Kien in the 65th minute.

The win guaranteed the title of V-League for Hanoi FC, while the league has only one round to go.

In other matches, Hai Phong beat Song Lam Nghe An by a three-goal margin, and Topenland Binh Dinh bagged a 1-0 victory over Da Nang.

Hai Phong and Topenland Binh Dinh will finish the league as second and third-place runner-ups.

Nam Dinh defeated Sai Gon FC 3-0 to secure their place in the V-League next season. 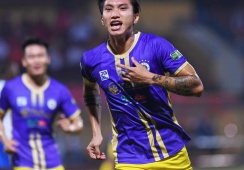