The Hanoi Municipal Youth Union organized the event in front of Ba Kieu Temple in the pedestrian zone around Hoan Kiem Lake.

A mass wedding for 18 couples took place on October 15, as part of the activities to promote the movement of civilized lifestyle in marriage among the youth within the capital city.

The program, themed “Collective Wedding in the New Lifestyle”, marked 10 years of implementing Directive No. 11 of the Hanoi Party Committee on continuing to implement a civilized lifestyle in weddings in Hanoi.

Standing Deputy Secretary of the Hanoi’s Ho Chi Minh Communist Youth Union and Chairman of the Hanoi’s Vietnam Youth Federation Nguyen Duc Tien said since the Directive 11 was issued by the Hanoi Party Committee in January 2013, there have been at least two mass weddings.

The first mass wedding was held in 2013 at Thinh Liet Primary School of Hoang Mai District with the participation of 10 young couples.

“We hope that this would be a good memory of the couples who held the collective marriage ceremony today,” he said.

They made a wedding registration amid the outbreak of the Covid-19 pandemic in 2021 in Hanoi.

The couple of Tran Ha Ly and Nguyen Quoc Manh, from Truc Bach neighborhood in Ba Dinh District, were happy to have wedding photos taken and joined the crowded wedding by the iconic lake in the capital city of Hanoi. The couple said their love story began two years ago, when they joined the Covid-19 pandemic prevention duty.

Also, at the event, the Hanoi Youth Union organized the program entitled “Essence of Vietnam” to handover certificates of “Talent Artisans and Craftsman” to six Hanoi artisans.

In addition, the ceremony to honor “The Quintessence of Vietnamese Craft Villages 2022” was also held to introduce the largest pair of Phu the or Husband and Wife cakes in Vietnam.

The pair of cakes with a diameter of 70cm, a height of 25cm and a weight of 130kg, has set a record as the largest pair of nuggets in Vietnam, produced by artisans from Bao Minh Confectionery Joint Stock Company.

These events are expected to contribute to building the image of elegant and civilized Hanoians and preserving the traditional cultural features in the nation's cuisine. 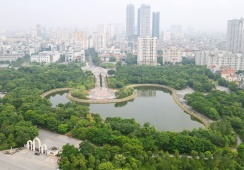 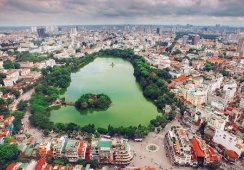 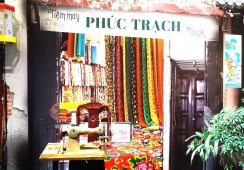