The cultural event, suitable for the local motion picture industry, is expected to attract people, including movie-goers.

The 6th Hanoi International Film Festival (HANIFF 2022) is expected to make headlines in the city and across the country, creating new vitality and motivation for the development of Vietnam's film industry.

With the theme "Cinema-Humanism, Adaptation and Development," HANIFF 2022 will be held from November 8-12 in Hanoi and the neighboring city of Bac Ninh.

The HANIFF 2022 got sponsorship from the US Motion Picture Association.

Speaking at the event, US Ambassador to Vietnam Marc Knapper said: "It was my pleasure to speak at the Hanoi International Film Festival which was co-sponsored this year by the Motion Picture Association. The US Government and the US Embassy in Hanoi are also excited to support the development of the Vietnamese film industry and Vietnamese filmmakers as they tell important stories. Cinema is a cultural bridge between our two countries and a driver of economic development."

At the opening ceremony of HANIFF 2022, Nguyen Van Hung, Minister of Culture, Sports and Tourism, said the biennial film festival is an excellent opportunity for Vietnamese filmmakers to integrate into the international film market, carry out the professional exchange, learn from experience and contribute to the development of Vietnamese, regional and international cinema.

In addition, at the opening ceremony of the film festival, the Organizing Committee presented the prestigious jury, composed of Polish director and screenwriter Janusz Jikowski (president of the jury for the feature film category); Japanese director Wakai Makiko (president of the short film jury); Sri Lankan screenwriter, journalist and film critic Ranjanee Ratnavibhushana (President of the NETPAC Awards), among others.

The festival features 123 films from over 50 countries around the world. The host country, Vietnam, contributed 22 contemporary films.

“Jasmine,”- a Hanoi-themed film by Dang Nhat Minh, 84, was screened at the opening of this year’s International Film Festival. This is the latest and last film of the veteran Vietnamese film director.

As part of the festival, there will be an exhibition, "Cultural Heritage and Relic Sites in Hanoi as Movie Sets," with more than 200 images from Vietnamese movies that have been shot in Hanoi.

In addition, participants in the film festival will also have a chance to join some side activities, including outdoor film screening programs, exchanges with actors and actresses, and sightseeing tours to some attractive destinations in Hanoi, among others.

Opening Film: “Jasmine,” a feature film by Dang Nhat Minh, made its debut at 2:00 PM on November 8 at National Cinema Center in Hanoi.

Outdoor Screening Program: Eight Vietnamese documentaries and animation films, including: “Hoi An - Tranquil Streets,” “Northern Village’s Communal House,” “Vietnamese Calligraphy Journey,” “Balloon,” “The Secret of the Garden,” “Maika - The Girl from Another Galaxy,” among others will be screened at 7 P.M from November 9 to 11 at the space in front of Monument "Determined to Brave Death for the Survival of the Fatherland" - Pedestrian zone around Hoan Kiem Lake, Hanoi.

Visit www.haniff.vn for more details about the screening schedule. A Hanoi retro café brings the past back to the future 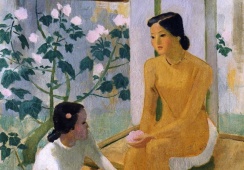