Some 245 million e-invoices issued in Hanoi in nine months

Some 245 million electronic invoices were issued in Hanoi between January and September, the Hanoi Tax Department reported on October 25.

Most of the e-invoices were issued for enterprises, households, businessmen, and individuals that wanted the invoices for accounting purposes, Director of the Hanoi Taxation Department Mai Son said.

Son said that people often forget to claim invoices when making transactions, which may affect their rights and interests and cause losses to the State budget as sellers can avoid tax duties through unclaimed invoices.

To encourage people to ask for invoices when they purchase goods and services and protect their rights and interests, the Hanoi Taxation Department and the General Department of Taxation announced the “Lucky bills” program in late September.

The program covers all individuals and enterprises holding e-invoices. By keeping e-invoices with specific information, buyers will have a chance to win prizes worth VND3 million-50 million (US$121-2,015).

The prize-giving ceremony is held every three months. On October 25, the Hanoi Tax Department conducted the drawing of "Lucky Invoices" for winners in possession of e-invoices issued during the second quarter of 2022.

At the award ceremony, Vice Chairman of the Vietnam Chamber of Commerce and Industry (VCCI) Hoang Quang Phong randomly selected 19 out of nearly 170,000 e-invoices.

VCCI vice chairman Phong said that the program is an activity that helps protect the rights and interests of buyers following tax-related regulations.

The program is one of the Hanoi Tax Department's efforts to adopt digital solutions in the administration and management of tax obligations, thus meeting the Government's requirements for digital transformation nationwide. 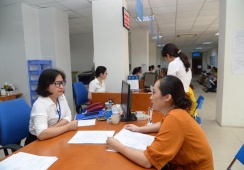