The Hanoi Department of Transport has mobilized staff to work 24 hours per day and seven days per week to speed up the process of approving means of transport eligible to travel through Hanoi.

As of July 29, Hanoi has issued priority "green cards" (priority card using QR Code) to 13,290 vehicles so that the drivers can carry necessary goods and workers to the city and other provinces during the social distancing, according to Do Cong Thuy, deputy head of the Transportation Department under the Directorate for Roads of Vietnam.

Thuy said that the QR code identity tag system of the Hanoi Department of Transport has been smoothly operated.

The system was hacked and overloaded on July 26 after several cities and provinces, including Hanoi and Ho Chi Minh City, have imposed stricter social distancing measures to prevent the novel coronavirus outbreak.

The Directorate for Roads of Vietnam has asked the Department of Transport of the northern provinces and cities to support Hanoi in facilitating the green card issuance and reduce the congestion, Thuy added.

The department has mobilized staff to work 24 hours per day and seven days per week to speed up the process of approving means of transport eligible to travel through Hanoi. The traffic of cargo trucks in the capital city has been normalized.

Phan Thi Thu Hien, Deputy Director General of the Directorate for Roads of Vietnam said that her organization has coordinated with localities to use software for registering, managing, and using vehicle identification cards with QR Codes.

Earlier, from 6:00 am on June 24, as part of efforts to implement Directive 17/CT-UBND on the Covid-19 pandemic prevention and control measures, Hanoi has banned all vehicles from entering the city, except for vehicles serving pandemic prevention and control activities, public services, diplomatic mission, and those for transport of workers, experts and necessities, which are allowed to run on the so-called "green channel".

To enforce the ban, 22 checkpoints have been set up at the main routes leading into Hanoi. At each checkpoint, the city police, in co-operation with traffic inspectors, medical workers, and civil defense officers of districts and towns, are working around the clock to monitor the movement of all vehicles and people entering or exiting the capital city. 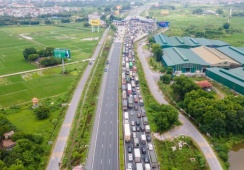