A two-month operation aims to strengthen the supervision of Hanoi's commercial facilities in terms of fire prevention.

The Hanoi Police Department will conduct a two-month inspection on fire prevention at industrial and processing parks as well as crowded entertainment and shopping areas.

The police will inspect business facilities in industrial and processing parks and hi-tech parks and others at district and commune levels.

In addition, the police will strengthen the supervision of fire prevention in leisure and service businesses with a large number of people and high fire risk, such as hotels, guesthouses, bars, clubs, apartment buildings, markets, shopping centers, warehouses and workshops.

All facilities are subject to regular and unexpected checks and re-examination will be taken to see how the fire and explosion prevention improves.

According to the Hanoi Police Department, the inspection will take place until December 15, 2022.

“Through the inspection, police officers will  improve their strengths and fix their weaknesses in fire and explosion prevention in order to protect the lives and assets for the people,” he said.

Hai also asked all units to   raise their awareness in fire and explosion prevention and rescue, and fortify their local operations.

The Police Department of Fire Fighting and Prevention has instructed all subordinate units to implement the plan, the department director Colonel Pham Trung Hieu said.

“After the inspection plan finishes, the city will be categorized into three levels in regard to flammable and explosive threats. Based on the categorization, we hope to prevent heavy fires and better protect the people,” Hieu said.

All district and commune units must be aware the activity is “a special operation” that requires the participation of both law enforcement forces and people, he said.

In addition, the fire police department will provide in-depth advice to local authorities to tighten control of high-risk commercial facilities and only those that meet fire prevention requirements will be allowed to operate, Hieu said.

"Local authorities must ensure that commercial facilities comply with fire and explosion safety requirements. Those lacking safety instruments should be suspended from operation," Hieu said.

He said local leaders must take responsibility for the occurrence of fires and explosions, casualties and damage to property in their jurisdiction.

The local authorities' measures come against the backdrop of several fires in Hanoi, which have caused billions of dongs in property losses and resulted in many fatalities. 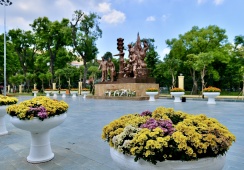