The main goal is to create an open space to promote cultural and traditional values.

At the launching ceremony, Chairman of the Hai Ba Trung People’s Committee Nguyen Quang Trung said the opening of the new pedestrian space has been welcoming news for the locals, especially ahead of the upcoming year-end festive period.

According to Trung, the Tran Nhan Tong pedestrian space is part of Program No.03 of the municipal Party Committee on urban renovation and economic development during the 2021-2025 period.

Over the years, the district has been working on a plan to set up the pedestrian space in Tran Nhan Tong street and surrounding areas to promote its potential in cultural, trade, and tourism development, Trung said.

“The main goal is to create an open space to promote cultural traditional values, which would serve as the foundation for sustainable urbanization and modernization in the city,” he continued.

These are the basis for the locality to further promote trade, tourism, and services for economic development and cultural preservation, he noted.

He added the local authorities are committed to continuing the renovation efforts to transform the landscape and create a unique cultural-cuisine space to attract tourists and people to Hai Ba Trung District.

Sharing Trung's view, Vice Chairman of the Hanoi People's Committee Duong Duc Tuan hopes that Tran Nhan Tong Pedestrian Street, including the surrounding areas of Thien Quang Lake and Thong Nhat Park, will be an attractive destination for those who come for sightseeing, entertainment and enjoying culture, history, and specialties.

“This is another step for Hai Ba Trung District to fully tap into the locality’s cultural and historical value to stimulate economic development, including the night economic model,” Tuan said.

Tuan noted in the future, the pedestrian space would be expanded to other streets, including Quang Trung, Tran Binh Trong, and Nguyen Du with many cultural venues such as Vietnam Cheo Theater, and the National Circus Theater serving as the highlights of the whole area.

During the upcoming New Year's Eve and Lunar New Year holidays, pedestrian streets in Hanoi have emerged as the to-go place for many locals to enjoy the festive periods.

For New Year's Eve, each pedestrian street would have its own cultural-entertainment activities, with highlights being the Countdown event at the Dong Kinh Nghia Thuc Square and the 2023 Vietnam International Half Marathon on January 1, 2023.

At the Trinh Cong Son walking street, the local authorities would hold an exhibition of ornamental plants and flowers throughout the Lunar New Year, while there would be an exhibition at the Old Son Tay Citadel walking street and an introduction to the cuisine of Duong Lam Village in Son Tay Town. 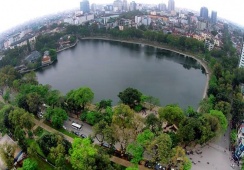