World Children’s Day is a chance to act and raise public awareness on issues that children are facing.

The Ministry of Labor, Invalids and Social Affairs (MoLISA) has called on ministries, sectors, agencies, and organizations to give greater attention and take stronger actions to enhance the mental health of children and their caregivers to help them overcome the Covid-19 crisis.

The event aimed to raise awareness on the significance of mental health to the growth of children and adolescents, who are the future generations of the country.

Speaking at the event, The United Nations Children's Fund (UNICEF) Vietnam Representative in Vietnam Rana Flowers noted that in the past two years, due to impacts from Covid-19, many issues related to child rights have been neglected.

Even when the pandemic ends, its socio-economic impacts and consequences on people’s psychological health still persist, the official said.

Noting that mental health has yet to receive adequate attention, Rana Flowers stressed the need to encourage children to share and speak out about their problems so as to receive support for improving their mental health.

Governments of countries should consider plans and strategies on caring for children’s mental health while investing in children support services, she said, stressing the need for schools, communities, and parents to recognize children’s issues and give them timely support.

“This year, World Children’s Day takes place in a special context in which children and adolescents are suffering the severe impacts from Covid-19 on their learning and mental health. The pandemic which has sent many children to quarantine centers and turned many others into orphans becomes a direct threat to children’s mental health,” Ha said.

The deputy minister stressed that the MoLISA has coordinated with relevant ministries and agencies in disseminating knowledge and information on mental health care and social psychology of children to medical workers, teachers, and parents.

Besides, the MoLISA has improved services on mental health care and psychological trauma prevention among children amid Covid-19, and helped form a child care network in the community, Ha added.

On this occasion, the organizing board launched a challenge to post video clips on mental health in Tiktok Vietnam.

World Children’s Day is a commemorative date celebrated annually to mark the adoption of the UN Convention on the Right of the Child, giving a chance to raise public awareness on important issues affecting the lives of children, and promote the engagement of children and adolescents in observing their rights.

The origin of the day goes back to 1954 when World Children’s Day was first established as Universal Children's Day and is celebrated on November 20 each year to promote international togetherness, awareness among children worldwide, and improve children's welfare.

Since 1990, World Children's Day also marks the anniversary of the date that the UN General Assembly adopted both the Declaration and the Convention on children's rights. Some 840,000 children in Hanoi eligible for Covid-19 vaccination 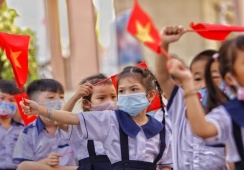