In 2020, Hanoi targets to attract over US$5 billion in FDI, while investment promotion activities would focus on new markets, particularly member countries of the CPTPP and the EVFTA.

The “Hanoi 2020 – Investment and Development Cooperation” conference, held on June 27, strongly promoted Hanoi as a safe and attractive investment destination in the post-Covid-19 era, according to Nguyen Gia Phuong, director of the Hanoi Promotion Agency.

The first conference of this kind was held in 2016 when the city attracted 23 projects with investment capital of VND36.91 trillion (US$1.58 billion). In another conference one year later, the number of projects given an investment license increased to 48 worth VND74.36 trillion (US$3.19 billion).

Notably, the 2018 edition of this conference, with 71 projects worth VND397 trillion (US$17.06 billion), laid the foundation for Hanoi to claim the top spot nationwide in two consecutive years of 2018 and 2019 in terms of foreign direct investment (FDI) attraction.

Japan is currently the largest investor to Hanoi with US$10.9 billion, followed by Singapore with US$8.2 billion, and South Korea with US$6.3 billion.

This results reflect strong efforts by the local authorities in promoting investments and improving the business environment, Phuong said.

For this year, the “Hanoi 2020 – Investment and Development Cooperation” was held right after the Covid-19 pandemic had been contained in the city. The event showed Hanoi’s determination to be the pioneer among Vietnam’s localities in rebooting the economy in the post-pandemic period.

More importantly, the process would accelerate Hanoi’s administrative reform and enhance the city’s business and investment environment towards the ultimate goal of achieving economic growth 1.3 times the national average for this year, he added.

The event attracted around 1,850 delegates, including senior government officials, 29 ambassadors and diplomatic officers, representatives from eight international organizations, foreign experts, among others. Notably, the audience included 1,200 domestic and foreign investors and business also participated, many of whom received their respective investment licenses from Hanoi’s authorities.

At the event, Hanoi's leaders signed 36 memorandum of understandings (MOUs) worth US$26.08 billion with organizations, businesses and investors, including 23 MOUs with domestic enterprises (US$17.85 billion) and 13 with foreign ones (US$8.22 billion).

According to Phuong, along with efforts to contain the pandemic, Hanoi has been implementing drastic measures to speed up economic recovery, such as improving the business-investment environment, encouraging innovative startups and boosting efficiency in global economic integration.

Phuong said Hanoi’s government gives priority to making the interest of businesses and people the center of its services, and this mindset would be incorporated in future working agenda.

Moreover, Hanoi is set to complete an investment portfolio for the 2021 – 2025 period to call for potential investment in the future.

In 2020, Hanoi targets to attract over US$5 billion in FDI, while investment promotion activities would focus on new markets, particularly countries taking part in the Comprehensive and Progressive Agreement for Trans – Pacific Partnership (CPTPP) and the EU – Vietnam Free Trade Agreement (EVFTA). 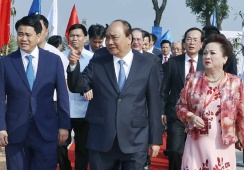 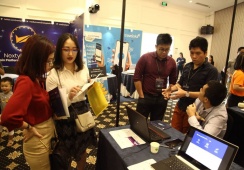