The Covi-19 pandemic has not prevented the rise in the bilateral relationship, which has been fortified with a focus on mutual support in pandemic response and economic cooperation.

Hanoi seeks further support from Russia in the fight against the Covid-19 pandemic, including access to vaccine supplies.

Secretary of the Hanoi Party Committee Dinh Tien Dung stressed the view in a meeting with the newly-appointed Russian Ambassador to Vietnam Gennady Stepanovich on September 23.

At the meeting, the Hanoi Party chief expressed his delight at the progress in Vietnam-Russia comprehensive strategic partnership that was established in 2012.

“The Covi-19 pandemic has not prevented the rise in the bilateral relationship, which has been fortified with a focus on mutual support in pandemic response and economic cooperation,” Dung said.

According to Dung, Hanoi is currently home to 37 investment projects from Russian businesses with a combined registered capital of $117.31 million, mainly in the fields of real estate, consultation, construction, IT, and telecommunications.

“The Moscow House in Hanoi” project has been approved by local authorities and set to locate in Me Tri Commune, Nam Tu Liem District, Dung added.

Dung expected relations between Hanoi and Russian cities, including Moscow and Saint Petersburg, would be expanded, especially jointly held exchange activities once the pandemic is contained.

For his part, Ambassador Stepanovich said the bilateral relations have achieved strong results in the past years, with Vietnam among Russia’s top ten trading partners.

Bilateral trade turnover in the first quarter rose by 33%, despite the pandemic impacts, he said.

The ambassador said he is committed to contributing to the Hanoi-Moscow relations, as well as the partnership of the capital cities and between localities of Russia and Vietnam. 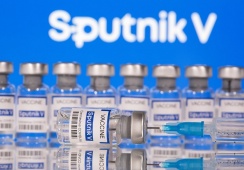