Such objectives were highlighted in the political report presented by Permanent Vice Secretary of the Hanoi Party Committee Ngo Thi Thanh Hang at the city's 17th Party Congress for the 2020 – 2025 period held today [October 12].

The report envisioned high living standards with comprehensive and sustainable economic and socio-cultural development by 2045, for which Hanoi would be a global city with international competitiveness.

The report also projects Hanoi’s tourism to remain a spearhead economic sector with average revenue growth of 12.1% per year. In 2019, the city attracted over seven million foreign tourists and was named among the world’s top 10 destination for travelers.

Meanwhile, the industry sector has posted average revenue growth of 8.3% per year, in which the manufacturing and processing subsector makes up 91%.

Notably, Hanoi led the nation in terms of revenue from the information and communication technology (ICT) industry which hit VND300 trillion (US$12.94 billion) in 2019.

The capital city is home to 16,000 ICT firms and two of the total five hi-tech parks in Vietnam.

Over the past five years, the total factor productivity (TFP), which is determined by how efficiently and intensely the inputs are utilized in production, contributed by nearly 46 percentage points of the GRDP growth, higher than the national average of 44.5%.

Hanoi’s business environment has been constantly improved over the years and provided substantial support for startups. Overall, the private sector currently contributes over 22% of GDP, up 1.2 percentage points over 2015 and created jobs for 83% of the workforce.

Challenges needed to be addressed

While Hanoi's economic growth has maintained high, the report suggested there have not been breakthroughs that are commensurate with the city’s potential.

This included modest growth in the services sector, which is below the average GRDP growth; low competitiveness of major products and goods; lack of investment in hi-tech farming; slow disbursement of public funds, among others.

The report acknowledges that the private sector has not fully realized its role of a key driving force for economic growth, as the majority of enterprises are of small and medium size.

Moreover, there has been insufficient investment in research and development (R&D) activities while the majority of firms are unable to integrate into global value chains.

Another key issue mentioned in the report was that the satisfaction rate of the public towards administrative units which is lower than the national average.

The report suggested more efforts are needed to address traffic congestion, environmental pollution and quicken implementation of technical infrastructure projects, including those in the fields of transportation, waste-treatment plant and parks, in the future. 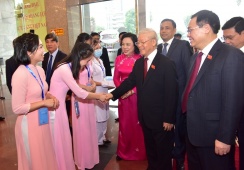 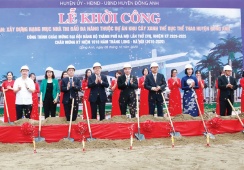