Cooperation between Hanoi and Israel’s cities would serve as the foundation for each side to further promote socio-economic development in the coming time.

Hanoi is expected to boost its friendship and cooperation with Israel, especially in developing policies for socio-economic development, urban management, responding to climate change, building smart cities, and preserving historical and cultural values.

Chairman of the Hanoi People’s Council Nguyen Ngoc Tuan gave the remarks during his meetings with Israel’s sides during a visit to Israel, the UK, and Ireland from September 14-23.

On the two days of September 14 and 15, the high-ranking delegation from Hanoi, led by President Tuan, worked with the Israeli city authorities Modi'in Maccabim Reut, the Tel Aviv City Hall, the Israel Chamber of Commerce -Vietnam (IVC), the Vietnamese embassy in Israel and local innovative companies.

In a meeting with the Mayor of Modi’in and Chairman of the Federation of Local Authorities Israel Haim Bibas, Tuan highlighted the strong progress in Vietnam-Israel relations over the year, saying the cooperation between Hanoi and Israel’s cities would serve as the foundation for each side to further promote socio-economic development in the coming time.

Modi’in Mayor Haim Bibas stressed the necessity for both cities to strengthen exchange activities in addressing issues during the urban development process.

In this regard, Bibas said Modi’in will share with Hanoi its experience in promoting smart cities, infrastructure development, and digitalization.

At a meeting with Tel Aviv City Council Chairman Leor Shapira, Tuanh expressed his hope that the visit will boost cooperative relations between the two cities, especially as Vietnam and Israel head towards celebrating the 30th anniversary of their diplomatic relations next year (1993-2023).

The Hanoi People’s Council Chairman called for both cities to sign a memorandum of understanding, which would lay the foundation for greater efficiency in cooperation in the coming time.

Shapira agreed with Tuan’s proposal on setting up a communication channel and said the council stands ready to work with Hanoi in addressing issues during the development process.

In his meeting with IVC Chairwoman Einat Halevi Levin, Tuan noted that Hanoi is working hard to improve its business/investment environment, and called for the involvement of foreign companies, especially from Israel, in this regard.

“Hanoi would create the utmost favorable conditions for investors to commit long-term operation in the city,” Tuan said.

Tuan also requested the ICV to continue serving as the bridge to promote trade and investment from Israel to Hanoi.

The delegation also paid a visit to the Peres Center for Peace and Innovation, founded in 1996 by Israel's late President Simon Peres, and water technology company Watergen, to discuss cooperation opportunities in innovation, startup development, and public infrastructure development.

As part of the working schedule, the Hanoi delegation visited Vietnam’s Embassy in Israel.

For his part, Tuan expected the Embassy to continue assisting Hanoi in promoting the capital's image among international friends and strengthening the cooperation between the city with Israeli localities, especially in investment and trade. 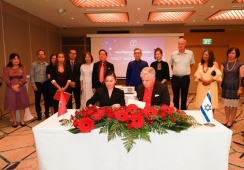 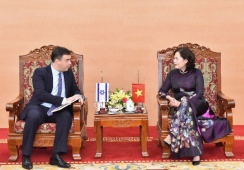