Park development is one of the critical tasks of local authorities to make Hanoi a "city worth living."

Hanoi needs to renovate and build new parks to ensure an average tree cover of 6-7m2 per person if the city wants to "make parks great again by 2023," said Ta Van Ha, deputy head of the National Assembly's Culture and Education Committee.

Ha said that while Hanoi lacks large parks, the existing ones are small, and the city should pool its resources to expand the area of parks.

Local authorities should review the list of urban parks and develop a specific plan for each, focusing on renovating old parks, he said on the sidelines of the 4th congress of the 15th National Assembly.

As for those in the planning stage, the city should work with investors to speed up their construction, he added.

"The city's population is increasing, but the land area is limited," Ha said.

"If Hanoi authorities do not allocate more land for public spaces such as parks, schools, and hospitals while allowing the construction of apartment and office buildings and shopping malls, it will take time to resolve the consequences," he said.

Ha added that many investors had focused only on housing projects to make profits, and park construction has been neglected.

He urged the city's authorities to deal strictly with the investors who have delayed the construction of the parks as they had committed to the people.

National Assembly deputy Truong Xuan Cu said many people are happy because the municipal authorities have shown their commitment to preserving and improving Hanoi's parks and lakes.

"Hanoi must make sure that park projects under implementation are completed properly. For other park projects, whose plans have been approved, the city should ensure that the park sites are protected from the encroachment of buildings and houses," he said.

Deputy Bui Hoai Son, a permanent member of the National Assembly’s Committee for Culture and Education, said that further development of parks would make Hanoi a “worth-living city,” thus making it an essential job for the local authorities.

"I hope the city authorities are determined enough to "make the parks great again in 2023", as has been said. We must have a specific plan and feasible solutions to make Hanoi the city of literature and creativity."

Former deputy Bui Thi An said that although it is appropriate to solicit private investment in park construction, private investors do not have full decision-making power over the projects.

In addition, she said that authorities should shut down existing commercial activities that have encroached on parks for a long time.

Street vendors have encroached on parks to open stores, and the public has called for drastic measures from authorities to solve the issue.

He said that the park had been occupied by sellers of games, foods, and drinks, narrowing its space for people to see the animals and enjoy the atmosphere.

“I am not happy that the park has been taken for personal interests like that, as the park must be the lung of the city, and it should make the air fresher and be more enjoyable for people,” he said.

In Dong Da District, a large part of the Thong Nhat (Unification) Park has been taken to set up some kiosks to sell stuff, food, and drinks.

Local people said such business activities have made the park filthier and caused environmental pollution. Furthermore, unlicensed parking spaces have occupied all pavements and prevented pedestrians from walking easily.

The same situation is also seen in other public areas, such as West Lake and Hoan Kiem Lake. Local authorities have shut down these activities, but the solution has remained shortlived.

Nguyen Van Ngoc in Ngoc Khanh Ward of Ba Dinh District said that the setting up of food and drink kiosks is necessary for such public spaces, but it must be supervised closely to ensure the sight and environment of the area. 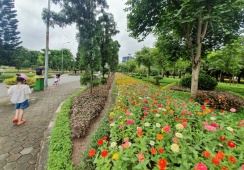