Cooperation between Hanoi and Vientiane remains an example of the long-standing and special relations Vietnam-Laos.

Hanoi and Vientiane have been taking steps to bolster economic ties during the Vietnam-Laos 2022 Solidarity and Friendship Year.

At the investment, trade, and tourism conference titled “Hanoi-Vientiane Cooperation for Development” on August 10, Vice Chairman of the Hanoi People’s Committee Nguyen Manh Quyen noted the cooperation between Hanoi and Laos’ provinces in general, and with Vientiane in particular, have been progressing in all spheres, including priority fields of economy, healthcare, education, agriculture, military, and people-to-people exchange.

Some notable projects included the Vientiane-Hanoi Friendship Vocational School worth VND14.8 billion (US$632,000); the clean water system at Xay Xom Bun commune with funding of VND8 billion ($342,000); and a lighting system in Vientiane with financing of VND4.4 billion ($188,000).

In return, Laos businesses in the fields of trade, real estate, finance, banking, and automobile reparation have invested over $8 million in Hanoi.

According to Tu, Hanoi remains a safe, attractive, and stable investment destination for investors.

A representative of the Laos-based ASEAN Mall called for more investment from Vietnamese businesses  to the country, saying the business environment is friendly and stable for foreign businesses, especially those from Vietnam.

Meanwhile, Vice Chairman of the Hanoi Association of Small and Medium Enterprises (Hanoisme) Mac Quoc Anh noted Laos is facing a shortage of high-quality workforce, which could be a source of concern for foreign investors.

He also called for the Vientiane authority to support Vietnamese companies in creating brand awareness among the locals.

At the “Hanoi-Vientiane Cooperation for Development” conference, leaders from Hanoi and Vientiane witnessed the signing of three memoranda of understanding between businesses from the two sides, including the MoU on technical cooperation and expanding agricultural production for domestic and foreign distribution between Phan Phet Agricultural Development Company and Vilaconic; cooperation in the production and distribution of paper between Villa Paper Production and Trade and Vila Import-Export Sole; cooperation on transferring agricultural digital software and improving linkage in farm produce supply chain of Vietnam-Lao between Autoagri Software Tech and Sun Commercial Import-Export and Service.

Given the huge potential for tourism development between the two cities, the Chairman of the UNESCO Hanoi Travel Club Truong Quoc Hung recommended travel agencies from Hanoi and Vientiane form a partnership and promote tourism in Vietnam and Laos.

On this issue, the Director of the Hanoi Promotion agency Nguyen Anh Duong said the agency is committed to holding tourism promotion events in Vientiane and laying the foundation for companies from the two cities to look for new business opportunities.

He called for the two shopping malls to set up a distribution network for Laos farm produce coming into Vietnam’s market.

Director of Vinmart Khuc Tien Ha said the company is always looking for high-quality agricultural products and would support Laos firms in this regard. 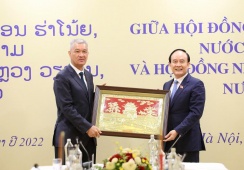 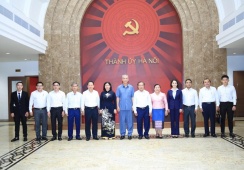