“Enhancing the ties with Lao’s localities, especially Vientiane, has always been the priority of Hanoi.”

Hanoi Party Committee's Secretary Dinh Tien Dung made the statement during a virtual talk with his Vientiane counterpart Anouphap Tounalom today [November 17], in which both sides agreed to take the bilateral ties to a new height with practical cooperation activities.
“The pure and loyal relation between Hanoi and Vientiane is rooted in the traditional friendship between the two countries Vietnam and Laos”, Dung said.
To keep the ties’ thriving, the Hanoi party chief proposed both sides keep enhancing the exchange at all levels while broadening cooperation in traditional fields such as agriculture, human resources training, lawmaking, labor, and social policies.
He also suggested Hanoi and Vientiane seek ways to boost cooperation in areas of mutual concerns namely e-governance, urban planning, and reinforce trade activities.
During the talk, Dung briefed his Lao counterpart on the city’s development during the past time with GRDP growth in 2016-2020 at 7.39% and income per capita of US$5,420.
Despite the severe impacts of the pandemic, Hanoi's growth in the first nine months of 2021 stood at 1.28% in comparison with the same period in 2020. Meanwhile, foreign direct investment projects of Hanoi account for 19.42% of the country's total.
He said Hanoi has set targets of becoming a green, cultural and modern capital while maintaining steady and sustainable growth and developing into a smart city that will be worthy of the City for Peace title awarded by UNESCO.
So far, the city has basically controlled the Covid-19 pandemic with 92% of its adult population being administered the first jab. It is speeding up a vaccination program for children aged 6-12 and step by step restoring economic activities in an effort to return life to normal as soon as possible, he said.
The Lao official, for his part, thanked Hanoi for its support in numerous areas. He especially mentioned an agricultural program with the help from Hanoi that brought effective and positive outcomes for Vientiane.
He proposed the two sides continue to reinforce ties across various fields including economy, culture, education, and science to make breakthrough progress, especially in signed projects.

Anouphap Tounalom also touched on the two cities' plan to build shopping and tourism centers and hoped Hanoi keeps supporting Vientiane in the agriculture area as well as joint work between the two labor departments.

Wrapping up the meeting, Dung pledged to facilitate all the cooperation activities between both sides and hope the talks’ outcome would contribute to fostering the special friendship between Vietnam and Laos.
TAG: Hanoi Vientiane cooperation party leader 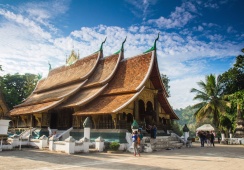 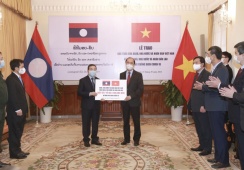 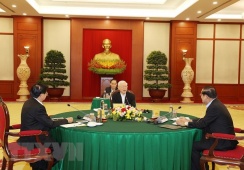 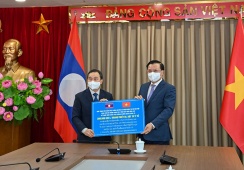