Hanoi, Manila, and Jakarta have made comments shortly after the US strengthened position in the sea of more than US$5 trillion worth of trade transits per year.

Vietnam, the Philippines and Indonesia, which have boundaries and strategic interests in the South China Sea have announce their stance following the US rejection of China’s claims in the sea.

Hanoi, Manila, and Jakarta have made positive comments on the US statement in which Washington shows its position in the South China Sea, emphatically supporting nations that have maritime disputes in the region.

US State Secretary Mike Pompeo name-checked those other than the Philippines: China's claims in the waters surrounding Vanguard Bank (off Vietnam), Luconia Shoals (off Malaysia), Natuna Besar (off Indonesia), and in the waters off Brunei’s economic exclusion zone.

He said in a statement released on July 13 that “Beijing’s claims to offshore resources across most of the South China Sea are completely unlawful, as is its campaign of bullying to control them.”

He affirmed that “America stands with our Southeast Asian allies and partners in protecting their sovereign rights to offshore resources, consistent with their rights and obligations under international law.”

In response to the US statement, on July 15, Hanoi said it “welcomes countries’ positions on the East Sea (internationally known as South China Sea) issues which are consistent with international law.”

Vietnam shares the view, as stated in the statement issued at the 36th ASEAN Summit, that the 1982 United Nations Convention on the Law of the Sea (UNCLOS) sets out the legal framework within which all activities in the oceans and seas must be carried out, Spokesperson Le Thi Thu Hang of Vietnam’s Ministry of Foreign Affairs said in a statement on July 15.

Hang said peace, stability, cooperation, and development in the East Sea (the South China Sea) are the common aspirations and goals shared by countries in the East Sea, the region and the world. Respecting the legal order at sea and implementing in full and with good faith and responsibility the UNCLOS is of critical importance to the realization of these goals.

Meanwhile, the Philippines’s Defense Secretary Delfin Lorenzana on July 14 said “We strongly agree with the position of the international community that there should be a rules-based order in the South China Sea.”“We urge China to comply with the Permanent Court of Arbitration (PCA) ruling, and abide by the United Nations Convention on the Law of the Seas (UNCLOS) to which it is a signatory,” Lorenzana said in a statement.

On the same day, former Philippine Foreign Secretary Albert del Rosario told an online forum of South China Sea experts that the Philippines should take the issue of the 2016 ruling “off the shelf” and raise it before the 75th session of the United Nations General Assembly this coming September.

“This will be the opportune moment because the upcoming UNGA session is the commitment to multilateralism,” Albert del Rosario said.

Given Indonesia's position is based on the UNCLOS, support by any other country for this position is normal, Indonesia’s Foreign Ministry spokesman Teuku Faizasyah told The Australian Financial Review.

“Indonesia's position concerning Natuna's waters is always firm and consistent, and it is based on the UNCLOS. The tribunal's award of 2016 confirmed Indonesia's position,” Teuku Faizasyah, the spokesman for the ministry, told BenarNews, an RFA-affiliated online news service.

“Indonesia should reaffirm its disappointment with China's reluctance to show good will by respecting Indonesia's sovereignty in the North Natuna Sea,” Dinna Prapto Raharja, a lecturer at Jakarta-based Binus University, told BenarNews.

Indonesia is the largest country in Southeast Asia which has no official claims there. However, tensions have arisen between Jakarta and Beijing over the presence of Chinese fishing boats off the Natuna Islands, an Indonesian chain in the sea’s far southern reaches, in 2016 and late 2019. 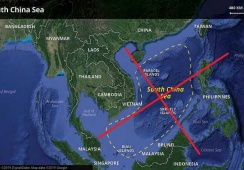