Hanoi is in need of US$350 billion to upgrade urban infrastructure and realize development visions until 2030.

A lack of substantial incentive policies is considered a major hindrance for Hanoi to mobilize social resources to realize its vision for development, including upgrading transport infrastructure and transforming satellite towns.

Released ten years ago, the Government’s Decision No.1259 on the approval of the general planning on construction of Hanoi to 2030, with a vision to 2050 has envisioned the development of Hanoi as a model of the urban cluster, including the metropolitan area and five satellite towns interconnected by transport systems of ring roads and centripetal axes linking with national and regional transportation networks.

To realize such a vision, the city would need a huge amount of investment capital for the construction of a variety of transport modes, including urban railways, new ring roads of No.4, and 5, and the expansion of ring roads No.1, 2.5, and radial roads.

But in reality, the budget constraint has remained a key issue that leaves the city’s transport infrastructure system staying behind the development pace of transport vehicles or the establishment of new residential areas.

Vice Director of the Hanoi Department of Construction Hoang Cao Thang said the city could only meet 46% of the total capital needs for infrastructure development.

At present, only one urban railway route (Cat Linh – Ha Dong) has become operational instead of 10 as planned. Two lines are under construction and the remaining are in the pre-feasibility study phase.

“The lack of funds for infrastructure investment has been a major hindrance for the realization of Decision No.1259, including five satellite towns, three towns with green corridors,” Thang told The Hanoi Times.

Thang also pointed out the insufficient investment in technical and social infrastructure to meet the objectives set in the decision, for which, he said the absence of strong incentive policies to attract investors is a major issue.

Chairman of the Vietnam Association of Construction Contractors (VACC) Nguyen Quoc Hiep said the formation of a transportation system connecting the inner metropolitan area with satellite towns would need a substantial amount of capital beyond the city’s budget.

Hanoi’s urban development program until 2030 estimates the capital needed for the city to realize decision No.1259 would be around VND8,200 trillion (US$348.4 billion), of which VND5,476 trillion ($232.6 billion), or 66.7% of the total, would be for the overall technical infrastructure framework, and the remaining for urban development.

In addition, the city's investment in inter-provincial transport infrastructure would require  VND4,700 trillion ($200 billion), but only 7% of such an amount would be covered by the city’s budget while and the construction of new satellite towns would need VND2,786 trillion ($118 billion).

A focus on infrastructure development, therefore, would impact the city’s spending on other socio-economic development targets, such as healthcare, social welfare, education, science, and technology.

The unavailability of funds would delay the construction of new satellite cities and transport infrastructure development.

Without the impact of the Covid-19 pandemic, it would take Hanoi at least 25 years to realize decision No.1259, and 11 years on since the implementation, the results have been modest.

“Breakthrough solutions are essential for Hanoi to mobilize social funds for development, especially from the private sector,” Hiep added, noting the public-private partnership (PPP) mechanism is a viable option.

Meanwhile, Former Vice Minister of Finance Do Hoang Anh Tuan noted the city should prioritize its limited funds on the site clearance process, which remains a long-standing issue in the implementation of public projects in Vietnam.

Tuan suggested the Hanoi People’s Council should be empowered with the authorities to utilize unused financial resources to ensure greater flexibility; allow the city to issue construction bonds and mobilize capital from legal sources for public projects. 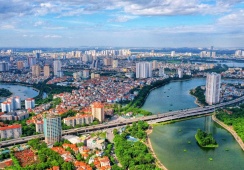 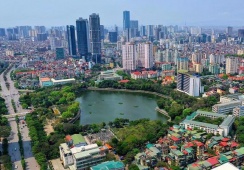