The goal is to ensure the effective use of different resources to serve the capital city’s development goals for the 2021-2030 period and subsequent years.

A new mindset is required when drafting Hanoi's urban planning for the period 2021-2030, which should be demonstrative of the desire of the people and authorities for prosperity.

According to Cao Viet Sinh, former deputy minister of Planning and Investment, the upcoming planning is considered a complicated task that involves the compliance of various laws, economic sectors, and fields.

“Changes are required for the local authorities to ensure the completion of the planning at the highest quality possible,” Sinh told The Hanoi Times, stressing the necessity for clarity in the vision and objectives of the planning.

“The planning should encourage innovation, and creativity and allocate sufficient space for development,” he continued.

Sinh mentioned the city’s ongoing preparation for the Ring-road No.4, which would bolster connectivity between Hanoi and neighboring cities/provinces as a key point to be considered during the planning process.

Vice Chairman of the Vietnam Association for Urban Planning and Development Dao Ngoc Nghiem expected the new approach in drafting this planning would help solve three major issues during the development process, namely the socio-economic objectives, the view for development in association with infrastructure investment, and the reorganizations of living spaces.

“These three objectives should be mentioned in a single planning version, rather than in separate plannings as before. This demonstrates the vision and status of Hanoi as the leading force for industrialization, modernization, and also the hub of culture, innovation, and science-technological development,” Nghiem told The Hanoi Times.

Former Director of the Institute for Development under the Ministry of Planning and Investment Bui Tat Thang noted a key point in the planning is to assess the city’s current situation, find solutions to address shortcomings and work out visions for the future.

“The planning should take into consideration major issues, such as heritage preservation, development of digital economy, green growth while ensuring the city’s unique development space unlike any other cities in the world,” Thang told The Hanoi Times.

The municipal Planning and Investment noted Hanoi’s planning for 2021-2030, with a vision for 2050, would aim to reorganize development spaces for socio-economic and defense activities in association with the development of infrastructure and utilization of resources.

“The goal is to ensure effective use of different resources to serve the city’s development goals for the 2021-2030 period and subsequent years,” the agency noted.

The planning for Hanoi in the 2021-2030 period, with a vision to 2050 would include the analysis and forecast based on the unique characteristics of Hanoi, the assessment of the current progress of socio-economic development, the use of land resources, a system of urban and rural structure; and the factors required for Hanoi to strengthen linkage with provinces/cities in the capital area. 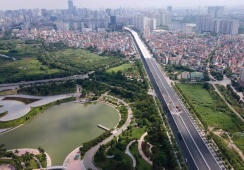