The Japanese government is planning to gradually relax border controls after the parliamentary election on October 31, giving priority to short-term business travelers.

Japan has decided to resume the reception of Vietnamese workers from November 8, as long as they are vaccinated and undergo quarantine, after months of suspension due to the impact of the Covid-19 pandemic, according to the Department of Overseas Labor under the Ministry of Labor, Invalids and Social Affairs (MoLISA).

Once in Japan, the employers are responsible for arranging the travel and quarantine of workers.

According to the latest pandemic prevention policy announced by the Japanese Government last week, fully vaccinated people (second dose administered at least 14 days before departure) with vaccines approved in Japan including Pfizer, Mordena, and Astrazeneca, who return a negative RT-PCR test result 72 hours prior to arrival can be quarantined at home for three days.

Those who have not been fully vaccinated or vaccinated with other types of vaccines are required to self-isolate at home for 14 days after entry. If returning a negative Covid-19 test after ten days, they can conclude the isolation period.

The Japanese Embassy in Vietnam has resumed receiving visa applications from Vietnamese citizens from July 27 after four months of suspension, according to Vietnam’s Department of Overseas Labor.

Specifically, visas will be granted to Vietnamese nationals travelling to Japan via direct flights for work or long-term stay with such status as business manager, intra-company transferee, engineer/specialist in international services, nursing care, highly skilled professional and designated activities.

The Japanese government imposed tighter border controls in January. Entry is only allowed for returning foreign residents and others with special status, such as spouses of Japanese nationals. Returning foreign nationals are required to take PCR tests and undergo quarantine.

The Japanese government is planning to gradually relax border controls after the parliamentary election on October 31, giving priority to short-term business travelers.

Atsuo Hamada, a professor at Tokyo Medical University, told Vietnam News Agency that prolonged entry bans would lead to a large impact on the domestic economy. It is time to think about reopening using proof of vaccination and other measures.

In 2020, Vietnam sent nearly 83,000 workers to Japan, accounting for more than half of the total workers Vietnam sent abroad. Due to the coronavirus pandemic, over 5,000 workers had to return to Vietnam within the first six months of 2020.

The country sent 33,500 workers to work abroad in the first half of this year, down 40% year-on-year due to travel restrictions to contain the Covid-19 pandemic. 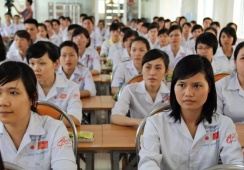