The Hanoi Department of Construction has once again requested the team to show their legal documents, but so far the company has not responded to the request.

A Japanese team has given up its own project to clean up the polluted To Lich river in Hanoi, VnExpress quoted Deputy Director of the Hanoi Department of Construction Hoang Cao Thang as saying at a press meeting on June 16.

Thang said that the city asked the Japanese team to report on the outcome of an experiment to clean up a section of the river and present legal documents of the company last November, year, but has not received their responses.

The Hanoi Department of Construction has once again requested the team to show their legal documents, but so far the company has not responded to the request.

In addition to piloting the cleaning of a section of the To Lich river, the Japanese team has also carried out the work on a section of ​​West Lake.

The pilot project to clean the To Lich river with the nano-bioreactor technology started in mid-May 2019 on a 300-meter section on the river.

The Japanese technology, nano-bioreactor, consists of infusing oxygen into the river to activate beneficial microorganisms, and creating an environment for these microorganisms to live in.

After nearly six months, the experiment equipment was dismantled. The Japanese team announced that it had achieved several goals: dealing with stench, decomposing a part of long-standing organic mud in the river bed and preserving the ecosystem.

However, Director of the municipal Department of Construction Le Van Duc evaluated that the nano technology was "not successful" in cleaning the river and the city will build a sewer along the To Lich river to collect sewage and transport it to the concentrated Yen Xa wastewater treatment plant.

Some people have come up with ideas to improve the environment of the To Lich river, but Hanoi's mayor Nguyen Duc Chung said it is essential to treat 180,000 cubic meters of sewage generated by the city's households every day before discharging them into the river.

The river used to be a branch of the Red river but was delinked by the French by filling a section as part of a city planning in 1889.

The river runs 14 kilometers through the downtown districts of Thanh Xuan, Hoang Mai and Thanh Tri. 200 sewage outlets discharge huge amount of sewage. On May 2020, the city’s authorities broke ground to build sewers along the To Lich river to collect and transport sewage to Yen Xa wastewater treatment plant.
Hanoi has unsuccessfully tried to clean it many times in the last decade. 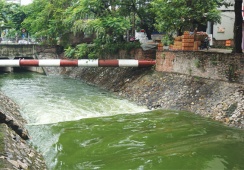