Life of people on Hanoi street under lockdown

“Faith and positive attitude will be our main weapons to fight the epidemic,” a resident said.

Another day has passed for Hanoi residents in Truc Bach Street which is under lockdown due to the Covid-19, as reported by VnExpress.

Truc Bach Street is named after the Truc Bach lake nearby. The streets, along with the contiguous Ngu Xa and Chau Long streets remain isolated after Vietnam’s 17th Covid-19 patient was found to be the resident of the quarter.

Police barriers have been erected at both ends of the street where 66 households and 189 people are asked to stay in isolation for 14 days.

The initially predominant feeling in the neighborhood in the morning of March 7 was the fear of grocery shortage. However, their fear was cleared as they could still order instant noodles, rice, eggs and vegetable online.

In addition, Hanoi’s government has prepared basic food packages for each household which contain vegetables, meat, fish, eggs and bottles of water and are distributed free of charge daily. “Each parcel has three eggs, two slices of meat or fish and vegetables which is delivered every day. Besides, we are given 10 kilogram of rice package and a bottle of cooking oil,” a resident said and joked, “The food is so nutritious, even my wife has never let me eat this well.”

“Items brought into the isolated area must be checked for sanitation,” said Nguyen Dan Huy, chairman of Truc Bach ward. Supplies are received by health workers at a separate gate who then disinfect and put them on a desk for people to pick up. Antiseptic solution is also available on the desk for people to wash their hands before taking away their items.

Neighborhood residents are visited twice a day by health officials, at 8:30 and 15:00. Hand sanitizer and garbage bags are distributed daily. At 18:00, a special group of collectors come to take the garbage away.

Being isolated for some days but the residents have remained positive. “We are at the center of the epidemic so we must remain calm in order not to create panic for the people out there,” a resident said.

Pham Quang Long, a citizen of Truc Bach street was told by phone that he and his family would be isolated. He intended to leave the area at first, but then he thought back. “I should not run away and be responsible with the community.” Thirty minutes later, Long received a call from a medical officer of Ba Dinh district notifying him that he would be taken for isolation.

At 2:00 am the next day, a car arrived, taking him and a few people to the isolation facility.

Long’s first meal in isolation consisted of stir-fry dish and two savory dishes with soup. The rice wrapped in foil to keep the heat surprised him. “The food here is better than that of sidewalk restaurants,” he thought.

In two days in isolation, apart from being measured body temperature and taken samples, during the day Long slept until noon and stayed awake at night to run his business from a distance.

Long said he guessed his infection rate “was only 0.1%”, but because isolation is a mandatory requirement, he would take it seriously.

“People should not fear isolation”, Long said, adding that in isolation, the people are given free meal and regularly disinfected. “We have no fear of being infected because if it happens, we, the isolated people, will be the first to receive treatment.”

“Faith and positive attitude will be our main weapons to fight the epidemic,” Long told reporters by phone. 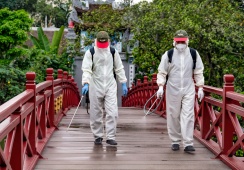 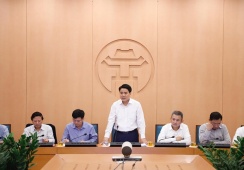