School reopening is a legitimate desire of both parents and teachers in Hanoi and many other localities.

The Hanoi Department of Education and Training is planning different scenarios before allowing local students to return to school.

Accordingly, once all Hanoi residents receive the full vaccination, expected to be in November, more than two million students in the capital city will be back to school by that time.

However, another scenario is that students of grades 6, 9, 10 and 12, living in pandemic-free areas (labeled “green zones”) could return to school earlier than the above-mentioned timeline.

Deputy Director of the Hanoi Department of Education and Training Pham Xuan Tien told The Hanoi Times that the scenario was viable.

“Ba Vi District, for instance, has not recorded new cases of Covid-19 for a long time. Currently, students in the district are still learning online, thus, it’s time to allow them back to school soon,” the deputy director said.

He noted that school reopening is a legitimate desire of both parents and teachers.

“Teachers told me they believe that their students, especially in the first, second and sixth grades, would better develop their skills if they were in the school. The first-grade students need time to get used to teachers and schools. Second and sixth-graders who started to learn the new general teaching plan in 2021, need face-to-face instructions from teachers at school,” Tien told The Hanoi Times.

He suggested that if the students were sent to school soon, one class in the green zones would be divided into two groups so that they would learn in morning and afternoon shifts to ensure safety.

However, the education sector still needs to contemplate before deciding when to reopen schools, Tien stressed.

Back-to-school plans in many other localities

Besides Hanoi, many other localities in Vietnam have made plans and prepared scenarios to ensure safety for students when they return to school.

Statistics of the Ministry of Education and Training (MoET) showed that as many as 25 provinces and cities have allowed pupils from primary to high school levels to return to school as of September 27.

There are 13 localities combining in-person, online and television schooling for students. In these localities, those living in “green zones” can go to school while children in unsafe areas continue to study online and via the television.

The remaining 25 provinces and cities are adopting online and television teaching due to the serious evolution of the Covid-19 pandemic.

The MoET has also issued an official document guiding the adjustment of the primary, secondary and high school education curricula for the 2021-2022 academic year in response to the pandemic and to ensure skill development.

Kindergartens have allowed five and six-year-old children to return to school. In elementary school, pupils of a class are divided into two groups: one going to school in the morning and the other in the afternoon.

Secondary and high schools are allowed to organize three online classes and three offline classes every week. Primary schools will not provide meals at school yet to ensure safety for schoolchildren.

All schools were told to be ready to properly handle students with symptoms of fever, coughing, or shortness of breath.

A school in HCMC’s Can Gio District might be the first in the city to welcome back students next Monday [October 4].

Thanh An Secondary and High School, on Thanh An Island of Can Gio District, could become the first school in HCMC to allow in-person classes for the 2021-2022 school year if its plan was approved.

The school’s principal Nguyen Ngoc Bao told the media on September 28 that his school plans to receive 131 children for in-person classes, adding that the plan has been sent to the district’s authorities for approval.

He added that among the 27 teachers at the school, 24 have been fully vaccinated.

"As the number of students in a classroom is quite low, between 25-30 students, there is no need to split classes. After the first week, if in-person classes prove to be safe and effective, we would consider expanding the scale," Bao said.

Previously, the HCMC education department had sent the municipal People’s Committee a plan to reopen schools in districts deemed safe amid the Covid-19 pandemic. Kindergartens, first and second grade classes would be subject to reopening, followed by 9th and 12th grade classes, prior to the rest. Classes would be divided throughout the day to prevent large gatherings.

Can Gio has so far labeled "green zone" along with District 7 and Cu Chi District. In addition, some other areas basically containing the virus are Thu Duc City, Phu Nhuan, Binh Chanh, and Go Vap. 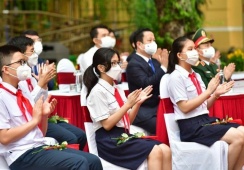