Memories of Christmas 1972 in Hanoi

Whether experiencing a difficult present or a painful past, Hanoians are always united and optimistic that they are looking towards a better future.

It is December now, the season of festivals is coming very close, but it seems that the pandemic concern and sorrow of the past are is still deeply affected to Hanoians’ daily life.

“Does anyone know the Omicron variant was just found in Singapore this afternoon? It’s so close to us!”, “Yeu Hanoi” a private forum dedicated to those who are living, working in Hanoi sounded the alarm.

Minutes later, the post received hundreds of comments from group members. They encouraged and reminded each other to wear masks, wash hands frequently and avoid large crowds.

Adverse news has constantly been informed recently. On December 2, Hanoi recorded 509 Covid-19 infections, the highest number since the outbreak of the pandemic. Meanwhile, many cases of Covid-19 related to vaccine side effects were reported, claiming the lives of several people including children.

The desire to close a sad old year has been stronger than ever among Hanoi people who eagerly await a better new year. Christmas is around the corner, the streets of Hanoi become more bustling than usual with streams of people eagerly waiting for Christmas Eve and the bell-ringing.

Despite the signs of Christmas having already been shown in the streets, Hanoians do not forget about their task fighting against the harsh Covid 19 pandemic, just like the way they steadfastly walked through the bloody battle that took place here 49 years ago.

In the historic Christmas bombing of 1972, the US air force dropped over 20,000 tons of ordnance on Hanoi, but could not subdue the patriotism and indomitable will of the Hanoi people.

The dolorous Christmas in 1972

On December 25, 1972, many Hanoi citizens having been moved away to avoid bombing returned to the capital, with the belief that at Christmas, the Americans would not drop bombs. Indeed, after the bombing on the night of December 24, the US announced a 36-hour stand-down to celebrate Christmas. Hanoi was spared from explosion sounds after seven days of fierce fighting with the B-52 Stratofortress. Life in Hanoi, at least for a while, returned to its peaceful beauty as before.

Musician Pham Tuyen recalls: “I was riding a bicycle on Ba Trieu Street and still heard the echo of singing voices. Hanoi people were very special: houses fell, the city was evacuated, but no house doors were locked, nor anything inside was lost. People flooded out to clean the streets.”

On those winter days, Hanoi's weather was unusually warm. Groups of students and young people flocked to the capital to spend Christmas and get provisions. Kham Thien Street, where many Catholics resided, was busy again. The neighborhood sat far from military bases, so people were convinced that it was safe there. Several Catholic families came back, looking forward to celebrating the birth of Christ at St. Joseph’s Cathedral. In the flow of people was Pham Van Thong’s family. That day, his wife and a 10-year-old daughter who returned from Thuong Tin (a suburban district of Hanoi) had a meal with him before they walked together to the Cathedral.

Thong recalls: “My wife and child came to spend Christmas, also because they missed our home after being away for so long. That was also an opportunity to get provisions.”

On Christmas Eve, Nha Chung Street was full of light. People flocked to St. Joseph’s Cathedral, crowding the streets as if the war had not been present in this land, but somewhere far away. Inside the Cathedral, lights and candles flickered, the bell was rung, and the priest performed a ritual, praying for peace. Everyone also prayed to God for a peaceful day soon.

In the memory of the local people, at Christmas 1972, Hanoi possessed a tranquil and contemplative beauty. And yet…

36 hours later, on the night of December 26, just one day after Christmas, B-52s carpet-bombed Hanoi again. The light went out, while warning sirens sounded, announcing that American aircraft were approaching. Everyone ran down to the underground shelter. The militia was ready to fight.

“After only one day of cessation, while the people - especially the Catholics - were still enjoying the Noel, they subjected to a brutal raid. The shelling led to the massacre in the center of Hanoi - Kham Thien Street. It is an extremely barbaric crime”, said Historian Duong Trung Quoc.

After the bombing, the street was devastated when all of its six blocks were leveled, nearly 2,000 houses damaged, 534 others were destroyed, and 283 people were killed.

Among the unfortunate were the children of Nguyen Thi Mao, whose house was in San Quan Alley, Kham Thien. Having learned that the US would cease bombing on Christmas Day, her eldest son and daughter-in-law grabbed that chance and returned from Lai Xa, Hoai Duc (another suburban district) to Hanoi to get provisions as well as look after their house. Sadly, the promise to bring food back to their mother and younger siblings was forever unfulfilled.

So many peaceful Christmas seasons have gone by; now the old bomb shelters have been filled, whereas the ruins have been rebuilt. But at the present, Hanoi people are eagerly awaiting Christmas Eve while still bravely fighting against the human’s invisible enemy - Coronavirus.

As of December 5, 2021, Vietnam’s Ministry of Health confirmed a total of 1,309,092 cases of Covid-19. The country has also recorded 26,260 deaths due to the pandemic. Hanoi’s count of Covid-19 cases amounted to 462 on December 5, including 189 locally transmitted. The fight against coronavirus seemed to last longer than expected in the country.

Hanoians will always remember the historical moments; it is thanks to those days’ sacrifices, today’s pains and losses will be remediated for a more peaceful and happy tomorrow. 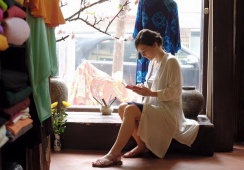