Effects of the seventh typhoon in Vietnam this year will be combined with those of the cold snap that is expected to hit the northern provinces and cities, including Hanoi.

Two consecutive storms are forecast to form on the East Sea later this week, with the current tropical depression likely to strengthen into the seventh one in Vietnam this year and to cause showers and thunderstorms in Hanoi, a meteorological official told Kinh Te & Do Thi.

Deputy Director of the Hydro-Meteorological Forecasting Agency in the Northern Delta region Nguyen Van Bay said that a new low-pressure area will be formed to the east of the Philippines on October 13-14 and would grow into a storm in the East Sea and Vietnam is expected to be on its path.

Effects of Nangka, the seventh storm in Vietnam this year, will be combined with those of the cold snap that is expected to hit the northern provinces and cities, including Hanoi, in the coming days, Mr. Bay added.

Meanwhile, the sixth storm, Linfa, has caused heavy flooding in Vietnam's central region, leaving some 30 deaths and more than a dozen injuries.

Vietnam is prone to destructive storms and flooding due to its long coastline.

According to the agency’s latest report, Nangka is continuing to move in the northwest direction, with about 20 kilometers per hour and is likely to gain strength.

By 7:00 pm on October 13, the storm was at about 200km north of the Hoang Sa (Paracel) archipelago, with the strongest winds near its eye reaching between 60km and 90km per hour.

Mr. Bay stressed that, moderate to heavy rainfall and thunderstorms with tornadoes, lightning, hail, and strong winds are expected to hit Hanoi and northern Vietnam from October 14 until October 16.

Earlier, information about the impending storms was unveiled during an October 12 meeting held by the Central Steering Committee for Flood and Storm Control in Hanoi to discuss emergency response plans to the flooding and heavy rain which has hit the central region, in addition to the upcoming tropical depressions.

During discussions, Hoang Phuc Lam, deputy director of the National Center for Hydro-Meteorological Forecasting, said two new tropical depressions are expected to form in the East Sea and would potentially develop into storms.

TAG: Showers thunderstorms the seventh storm in Vietnam this year 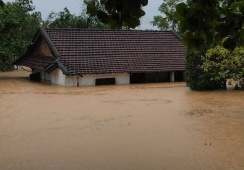