Nguyen Nhat Anh's books to be published in South Korea

A children’s book-themed daily life under, guess what, a dog’s viewpoint by the most beloved writer by Vietnamese children- Nguyen Nhat Anh will be released in South Korea.

After “Give Me a Ticket to Childhood” became the renowned writer’s first work to have its Korean version published in South Korea, another book of Nguyen Nhat Anh - “I am Beto”, is expected to be printed in early 2022.

A worth-reading book for both children and adult

Accordingly, the work “I am Beto” will be translated into Korean by translator Jeong Yekang, and is expected to be published in South Korea in early 2022.

Earlier, the “Give Me a Ticket to Childhood” was released by Dasan Books Publishing House in 2013.

On the publication of another brainchild in South Korea, Anh said there are countries that are geographically distant, but thanks to literature, cinema, music, and art, they are familiar to Vietnam.

“How could you not want to visit Notre-Dame in Paris once if you love the works of Victor Hugo? I believe that literature not only brings us a sense of beauty, but it is also a wonderful means to explore the land, to learn about a country, and to admire a person,” he said.

“That’s why I hope the books by Vietnamese writers will inspire more love of our people and our country among Korean readers,” he added.

According to local experts, writer Nguyen Nhat Anh is regarded as “an author of colorful stories for both teenagers and adults.”

The book “I am Beto” was first published by Youth Publishing House in 2007, and is a really special work as Anh wrote from the perspective of a smart, mischievous, and emotional puppy, who truly empathizes with humans.

The work has been highly praised by both critics and readers thanks to its original and impressive writing style, and at the same time caused a fever among readers across the country due to the profound meanings and humanity it carries. Therefore, “I am Beto” is suitable for both young and adult readers.

Poet Nguyen Quang Thieu remarked: “It is a book written for everyone, children and adults. The life of Beto, a little dog, contains all the similar realities of life and weariness that each person has gone through such as joys, interests, friendships, fears, courage, memories, good and evil, dreams, and so on.”

“In the story, Beto the puppy plays the role of the narrator and tells us about all that happens around him, which makes readers believe they can understand, guess what, the language of dogs,” he stated.

Beto’s colorful life revolves around Ni, who is a lovely and wise dog. When recounting a bloody battle for a bone, Beto draws a conclusion: “Every war broke out just for food, even though people always try to cover that up with great purposes”.

He also thinks that “When you trust or worship someone too much, you will never stay alert, or even have doubts about that person. And sometimes you die because of your naive trust”, after Hoang, an ugly old neighbor of his owner, kicked him and slammed his head against the wall.

A successful writer for children

Nguyen Nhat Anh is a Vietnamese author who has achieved a lot of success in his career, as well as considered one of the most successful writers for teenagers. There are thousands of works having been written by Anh during his over 30 years of writing career.

Duong Thanh Truyen, acting director of Youth Publishing House, said: “The publishing house has accompanied author Nguyen Nhat Anh for 30 years. And we continue our journey to bring his books to children and teen readers across the country.”

Anh began writing in 1984 and is known for his simple style and accurate depiction of children’s minds.

Many of his compositions are printed, published, and taught in schools abroad. In September 2020, the copyrights of his two works “Give Me a Ticket to Childhood” and “Through the Daisy” were purchased by Nikkei publishing house and Japan's Daido Life Foundation for publication in Japan.

A number of Anh’s books have been taught in foreign countries: “Give Me a Ticket to Childhood” has been selected as extra-curricular reading material for high school students in Thailand, as well as a work that second-year students of the Faculty of Arts, Chulalongkorn University (Bangkok) can choose for the end-of-course essays; “The Girl from Yesterday”, compiled by Dr. Maxim Syunnerberg, was published and officially became a textbook for Vietnamese teaching at M.V. Lomonosov Moscow State University (Russia) since 2012.

“Each nation hangs a bell in front of its window of the soul. Writers undertake the mission to ring those bells, with literature,” Anh said at the ASEAN literature awards ceremony held in Bangkok, Thailand in 2010.

In addition, many of Anh’s books have been adapted into movies, such as “I See the Yellow Flowers on Green Grass”, “The Girl Comes from Yesterday” and “Blue Eyes”.

These films are among the highest-grossing productions in the country’s movie industry. They have also won several awards at local and international film festivals. 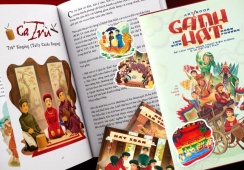