The current designed capacity of the airport does not meet the annual growing volume of air passengers.

The already overloaded Noi Bai International Airport on the outskirts of Hanoi have its annual capacity increased to 63 million passengers and two million tons of cargo by 2030 to meet the growing demand, according to a proposed plan of the Civil Aviation Authority of Vietnam.

The airport is projected to serve both civil and military purposes and capable of handling large long-haul aircraft such as B777-X, B747- 8, B777-300ER and A380.

According the plan, which has been submitted to the Ministry of Transport for consideration, a new runway will be built to the south, in addition to the two existing runways to the north of the airport.

By 2030, the airport will have three passenger terminals, among which the existing T2 Terminal will be upgraded to reach an annual passenger capacity of 30-40 million. In addition, a new T3 terminal in the south will have an annual capacity of about 30 million passengers.

By 2050, the passenger volume is expected to reach 100 million and cargo volume 5 million tons per year. Therefore, the airport is planned to add a 4th runway and another terminal with a capacity of 25 million passengers at the location of the existing T1 terminal. The plan also contemplates building a fifth terminal with a capacity of about 25 million passengers per year as an option of contingency.

The airport has a land bank of 2,230 hectares, which is sufficient for also defense purposes.

The annual volume of passengers and cargo through Noi Bai airport increases by over 10% on average. It handled nearly 26 million passengers in 2018 and about 29 million in 2019, exceeding the current designed capacity of 25 million. 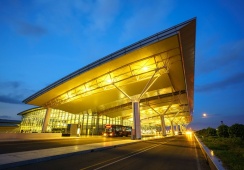 Noi Bai air terminal 2 due for completion in 2014