Pho vit or noodle soup with roasted duck, an ethnic specialty from the mountainous areas, has gradually cemented its position on Hanoi's cuisine map.

Originally from the mountainous provinces of Cao Bang and Lang Son in northeast Vietnam, the specialty has been brought to Hanoi and becomes a change of pace for the morning.

Instead of being made of beef or chicken like the usual Pho (Vietnamese traditional noodle soup with beef or chicken), the Pho vit uses fragrant roasted duck pieces with glossy red skin.

According to Phi Linh, a chef of Pho Vit Lang Son in Tran Duy Hung Street, removing the characteristic odor of this bird is the most important step when cooking Pho vit.

“After being cleaned, the duck is washed with alcohol to remove odors. The skin is smeared with a golden sauce from honey or malt mixed with soy sauce,” he told The Hanoi Times.

“The duck belly is filled with stuffing, sewn up and marinated for a few hours to absorb spices before being roasted. The finished product has a mouth-watering brown color,” he added.

In order to add more flavor to the dish, the broth of Pho vit is the stock from boiling duck and stewing pork bones with onions, ginger, and other secret ingredients.

Unlike Hanoi beef noodle soup, which is loved by many thanks to its clear broth, Lang Son duck noodle soup is darker and oil-shiny. Still, this dish does not cloy diners’ appetite but brings a completely new flavor, combining fragrant mac mat or Clausena Indica leaves and greasy roast duck.

Pig bones are stewed for hours on low heat, resulting in a broth that has a natural sweetness and fragrant flavor while the broth still remains clear. “There’s no need to add monosodium glutamate or other additives to the broth to enhance the taste,” Linh said.

Before being served to diners, each bowl of Pho vit is added with a spoonful of dark water taken from a separate bowl. This water is decanted from the belly of each roasted duck, having absorbed spices stuffed inside such as mac mat leaves, onions, lemongrass, garlic and soy sauce. Many diners feel that Pho vit bowls are flavorful thanks to the addition of this special “spice”.

The final step is sprinkling some green scallions and beansprouts on top to add a strange flavor to the dish. Diners can enjoy Pho vit with lemon, bamboo shoots soaked in chili vinegar as well as raw vegetables.

Win the heart of the gourmet world

For many Hanoians, having a piping hot bowl of Pho vit, which is served with scallions and beansprouts is the best way to start a new working day. However, many people choose the dish as a special treat for the weekend.

If traditional Pho bo can be found everywhere in Hanoi, duck noodle soup is quite difficult to find. Chef Phi Linh in Tran Duy Hung Street’s Pho vit store believed that there are less than 30 restaurants serving the specialty in town.

Another popular Pho vit restaurant in the capital is a small one at No 193 Trung Kinh Street, Cau Giay District. The owner is a native of Cao Bang. The restaurant is simple without even a signboard, but still always crowded with diners from very early morning until 10-11am.

Tuoc Dao, a regular customer of the restaurant, shared that he comes here every weekend. “This dish tastes really different. The crispy roast duck is soaked in a rich broth, creating a very delicious flavor. There is also duck sausage here, which will make you addicted after one try,” he told The Hanoi Times.

The price of Pho vit starts at VND35,000 or US$1.5 and VND50,000 or $2.14 per bowl for children and adults respectively. In addition to the main dish, the restaurant also offers pork legs and free green tea so that diners won’t get fed up.

For another option of the specialty of Cao Bang province at the restaurant, the diner can either try the mixed sweet-and-sour Pho vit or Banh cuon Cao Bang - Cao Bang’s steaming rice pancake.

The mixed sweet-and-sour Pho vit is prepared with similar ingredients to normal Pho vit, but added with some fried onion and sweet-and-sour fish sauce. Meanwhile, the broth is served as an additional dish.

Similar to Pho vit, the price of Banh cuon Cao Bang is at $2.14 per portion at the restaurant.

Apart from these dishes, dinners who enjoy their breakfast at the eatery also have a chance to try some other Cao Bang province’s specialties such as Banh gai or black glutinous rice cake, chestnut as well as buy some vermicelli and dried bamboo shoots. 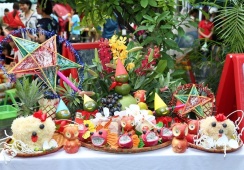 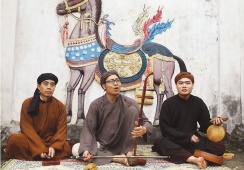 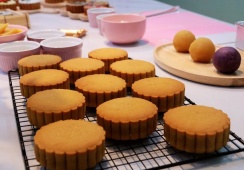