NordCham CEO Quist Thomasen gave the remarks in a meeting with Chairman of the Hanoi People’s Committee Chu Ngoc Anh on April 16.

According to Thomasen, many Nordic cities, including Helsinki, Copenhagen, and Amsterdam have set example in building smart and green cities, while Nordic enterprises have strong experience in applying advanced technologies to address urban issues in transportation, public order, environment, and energy.

On this basis, NordCham is willing to share its expertise and introduce enterprises to work with Hanoi in this regard, he said.

Thomasen expected a new wave of investment from European companies to Vietnam as a result of the EU – Vietnam Free Trade Agreement (EVFTA), advising Hanoi to soon draft mechanism for foreign firms to better search for new opportunities and partners in the city.

Hanoi’s Mayor Chu Ngoc Anh noted the capital city targets to become a green, smart and modern city by 2030, and eventually a global city by 2045.

While pushing for the development of e-government, Hanoi is prioritizing the application of technologies to address existing urban issues, especially in transportation, healthcare and environment.

Anh noted there have not been any cities in Vietnam qualified as smart city, therefore, “experiences from Nordic cities in this regard are very useful for Hanoi in the coming time,” said the mayor.

“Hanoi will create favorable conditions for Nordic enterprises to expand and invest in potential fields in the city, including green technologies, renewable energy, and sustainable development,” said Anh. 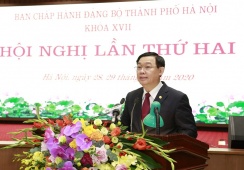