Weather experts forecast that there would be 10 and 12 storms and tropical depressions in the East Sea this year, of which four to six storms would directly hit the Vietnamese mainland.

A tropical depression has strengthened into a storm in the East Sea, marking the first tropical storm to hit Vietnam’s northern coastal provinces, according to the National Center for Hydro-meterorological Forecasting (NCHMF).

Named Chaba, the storm is forecast to blow strong winds and cause rough seas in the East Sea (internationally known as South China Sea). According to the center, the name of typhoon Chaba was proposed by Thailand to the Typhoon Committee. “Chaba” is taken from one of the symbolic flowers in Thai festivals and daily life, the hibiscus.

At 7:00am on July 1, the eye of the storm was about 300 kilometers from Vietnam’s Hoang Sa (Paracel) Archipelago. The strongest wind near its eye was 75-88km per hour, the NCHMF said, adding that the average wind speed was recorded at 62-74km per hour, and gusts were up to 100km an hour.

Storm Chaba is expected to travel northwest in the next 48 hours. As of 10:00 am on July 2, the storm will be situated 120 kilometers northeast of China’s Hainan Island, packing winds at 62-88km per hour.

Due to the influence of the storm, rough seas, strong winds, and waves as high as three to five meters are expected in the northern part of the East Sea.

The storm is forecast to move northwest at a speed of 10-15km per hour. It is expected to be 200km from northern Quang Ninh Province at around 1:00pm on July 2 with the wind speed  reaching 75-88km per hour.

By 7:00am on July 3, it will change its direction to   north-northwest with a speed of about 5-10km, with the intensity expected to weaken.

The NCHMF has warned of strong winds (39-61km per hour) and high waves of 4-6m in the north of the East Sea and the storm will become more powerful over the next few days, adding that its development will be complicated.

The border guard command said on July 1 that it had warned nearly 60,000 ships about the storm. Vietnam’s National Steering Committee for Natural Disaster Prevention and Control has asked authorities in the coastal localities from the northern Quang Ninh Province to the south-central Binh Dinh Province to proactively take preventive measures.

Localities must also make plans to evacuate people living in areas which are prone to floods and landslides and have measures to ensure safety for people and tourists on the islands.

Measures must be implemented to protect dyke systems and ensure the safety of dams, especially the key ones, small hydroelectric reservoirs and works under construction or repair.

The NCHMF noted that there would be 10 and 12 storms and tropical depressions in the East Sea this year, of which four to six storms would directly affect the Vietnamese mainland. 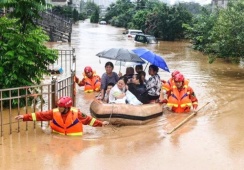