The exhibition affirms the great achievements of the August Revolution and pays tribute to President Ho Chi Minh’s contributions to the nation's building and development.

The online exhibition entitled “Independence Path” is will be displayed online from August 31 at the website vnfam.vn and fanpage facebook/baotangmythuat of Vietnam National Fine Arts Museum.

Held on the occasion of the 76th anniversary of the August Revolution and Vietnam National Day, the exhibition features 18 paintings on various materials such as oil on canvas, lacquer, gouache, and woodcarving by 15 individuals and groups of local painters.

Particularly, many paintings at the event feature President Ho Chi Minh in important moments of the Vietnamese revolution, including “Mua xuan Bac ve Pac Bo” (The Spring that Uncle Ho Returns to Pac Bo) by painter Duong Tuan, depicting the moment President Ho Chi Minh’s returned to Cao Bang on January 28, 1941 after more than 30 years of expatriation to search for a way to liberate the nation.

Pac Po village in Truong Ha Commune, Ha Quang District, Cao Bang province was closely associated with a particularly important historical stage of the nation. At the place, the 8th Meeting of the Party’s Central Committee was held from 10 to 19 May 1941 and adopted the decision to found the  Viet Minh (League for the Independence of Vietnam).

According to the Fine Arts Museum, with its realistic and concise visual language, the exhibition is telling the story of Vietnamese people staying united to overcome all difficulties and hardship to gain victory 75 years ago. 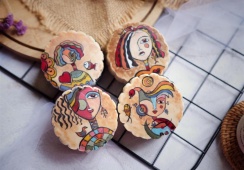