Despite it is salty, slightly sour, and too hard for the taste of foreigners, the pickled baby eggplant has a special place in Vietnamese cuisine.

This old Vietnamese saying means that Vietnamese people away from home always miss the native land, the morning-glory soup, and pickled eggplant.

Not a course in itself, the dish serves more as a condiment, enhancing and complementing the flavors of the recipes it accompanies.

Ca muoi is served for meals all year round with a range of different foods, but is said to go best with rice-field-crab soup, a traditional dish incorporating crab, spinach and taro, a seasonal vegetable and tuber widely available in summer.

Being salty, slightly sour and crunchy, it seems that the pickled eggplant dish is barred from expat's list of choices in Vietnam.

But Leigh Bancroft, a close Australian friend of my family, is an exception, as she loves the pickles served with steamed rice to eat alongside rice-field crab soup.

We usually welcome her with authentic Vietnamese meals with crab soup, pickled eggplant and boiled chicken, in addition to other typical Hanoi dishes such as fried spring rolls (nem ran), young rice and pork pies (cha com) and banana flower salad (nom hoa chuoi).
“I always love dishes that are prepared in the ‘native’ style of Hanoians. And pickled eggplant or boiled chicken are the two most typical foods.” she said.

Traditional earthen vats are required to make ca muoi. The recipe itself is quite simple and almost guarantees a delicious result if certain basic principles are followed. The best eggplant for the recipe is said to be the Nghe An white variety, which can be found in the markets surrounding Hanoi.

Firstly, the eggplant must be dried, ideally the day it is bought from markets. At this stage it is advisable to try to avoid cutting, breaking or scratching the skin, otherwise, it will turn black because of fluid leakage.

The dried eggplant is then washed before being immersed in warm, salty water for a week or more, depending on the weather.

A range of special ingredients, including minced garlic and galingale flower (a relative of ginger, arrowroot and turmeric) are also added to the concoction, which should be kept out of the sun to prevent the fruit from spoiling.

It is not uncommon to see barrels of eggplant covered by a bamboo trellis and a millstone to keep the buoyant eggplant submerged underwater. A salted eggplant that is crisp, ivory-white and slightly salty, leaving behind a bath of fresh, clear water is considered perfect.

Over the past time, the dish was once so popular that the above standards were used to judge the dexterity of prospective daughters-in-law.

And if so, my mother-in-law is the perfect daughter-in-law of the family. The pickled vegetables and salted eggplant dishes that she prepares always have special tastes and textures that have always been the family's favorite side dishes for decades. 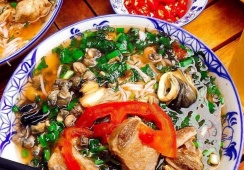