Promote the heritage of Thang Long Imperial Citadel in France

The space to introduce the heritage of the Imperial Citadel of Thang Long - Hanoi has just been opened at Saint-Ayoul Monastery, in the ancient city of Provins, Ile-de-France region of France, on December 6.

The display features several typical models of archaeological artifacts unearthed at the Imperial Citadel of Thang Long, including the terracotta-shaped bodhi leaf tiles and dragon and phoenix heads, among others.

According to the national treasure record of the Institute of Imperial Citadel Studies, the phoenix-themed Bodhi leaf tile is an original artifact found in pit A20 at the 18 Hoang Dieu Archaeological Site in Ba Dinh District, Hanoi.

It remained almost intact, and the creativity of the sculptors created the difference and uniqueness to the phoenix image under the Ly - Tran Dynasties in the 11th century. As confirmed by scientists, it is also a single and one-off hand-crafted artifact without any similar copy.

The artifacts modeled after the original size will be displayed until December 2023.

Besides, visitors will also have the opportunity to learn about Hanoi's famous historical sites through a video clip, panels, books, and souvenirs annotated in three languages: English, Vietnamese and French.

According to Olivier Lavenka, Mayor of Provins, the Imperial Citadel of Thang Long and Provins have at least two things in common: both are honored by UNESCO for their invaluable culture, and the two have a history of a thousand years.

“It is these two similarities that set the stage for the partnership of the two cities, represented by today’s event,” he said.

“The cultural event is even more meaningful, as it marks the 50th anniversary of the UNESCO’s Convention Concerning the Protection of the World Cultural and Natural Heritage, the ‘20 years of researching, preserving, and promoting the value of the Imperial Citadel of Thang Long-Hanoi’; and 20th anniversary of Provins to be inscribed on the UNESCO’s World Heritage,” she stated.

Cultural diplomacy is one of the three pillars of Vietnam's foreign policy. The introduction of the Thang Long Imperial Citadel heritage in the ancient town of Provins is a practical activity to concretize this policy. It contributes to promoting Vietnam’s cultural heritage and exchanges between Vietnam and France towards the 50th anniversary of diplomatic relations and the 10th anniversary of the Vietnam-France strategic partnership in 2023. 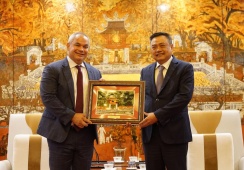 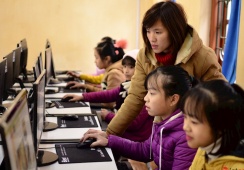 Hanoi plans to protect children on the Internet 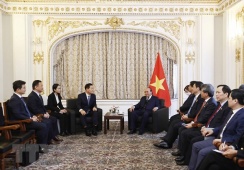