Between now and 2030, the Red River Delta should continue its rapid and sustainable development based on a modern economic structure imbued with national cultural characteristics.

The rapid and sustainable development of the Red River Delta is not only the responsibility of the local provinces and cities in the region but of the entire political system.

General Secretary of the Communist Party of Vietnam Central Committee Nguyen Phu Trong made the remarks during a national conference on implementing Politburo Resolution No. 30 on guiding the development of the Red River Delta held today [November 29].

Over the years, the economic size of the region has been on the rise, with contributions to the national GDP from 26.9% in 2010 to 29.4% in 2020. The GDP per capita in the region remains 1.3-fold higher than the national average, and budget revenue made up 32.7% of the total.

Total social capital mobilized for development in 2021 represented a 20-fold increase from 2005 and accounted for 35.1% of the total, while the urbanization rate reached 41%.

However, the development level of the Red River delta remains below the region's potential and advantages.

This is especially important as the Red River Delta is considered the country's northern gateway to ASEAN and China, the world's largest market, not to mention having a multimodal road, sea, air, and rail transportation system.

Moreover, the modest economic scale and the limited share of the modern manufacturing sector in the total production value have not fully served to drive rapid and sustainable development.

The inadequate socio-economic infrastructure system, the lack of coherent vision in urban-, and industrial development, rising environmental issues, and the widening gap between rural and urban areas have also been considered major issues for the region's progress.

“The circumstance requires the Politburo to issue a new resolution to create breakthroughs in the region's socio-economic development and ensure national defense-security during the next phase,” Trong said.

According to Trong, resolution No.30 continues to identify the Red River delta as a strategic base in politics, economy, culture, society, environment, defense, security, and foreign affairs for the nation.

In this regard, Trong called for all cities/provinces in the region to realize their advantages and potential, eventually fulfilling their roles as the country’s main driving forces during the economic restructuring process in association with revising the growth model and pushing for modernization and industrialization.

“Regional development, however, should be in line with the national socio-economic strategy and the national planning, including sustainable development vision for green growth and climate change adaptation,” Trong stressed.

The Party chief also stressed the government's need to finalize a working mechanism and policies to facilitate efficiency in inter-provincial linkage.

“The Red River delta is expected to take the leading role in applying science-technology, innovation, digital economy, and social development, but at the same time maintaining a balance in efforts to promote the development of politics, economy, culture, the society with environmental protection and climate change response,” he continued.

Resolution No.30, therefore, has set out clear objectives. By 2030, the Red River delta should continue its rapid and sustainable development based on a modern economic structure imbued with national cultural characteristics.

“The region would serve as the nation’s center for the high-quality workforce, innovation, digital society, and economy,” he said.

By 2045, the Red River delta is envisioned as the leading hub in education and training, science-technology, innovation, and public health, boasting modern and smart socio-economic infrastructure.

“The region should have several financial and economic centers at regional and international levels, while urban cities are connected into a smart, green, and sustainable network. The people are to have a high income, a happy and prosperous life,” Trong said. 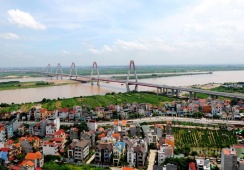