Vice Chairman of Samsung Lee Jae-yong is set to meet Prime Minister Nguyen Xuan Phuc during his trip to Vietnam.

During Mr. Lee previous meeting with Vietnam’s PM Phuc on October 30, 2018, Mr. Phuc expected Samsung to speed up construction of the R&D center in Hanoi, which is part of the plan to promote research and development in Vietnam.

Yonhap said in the upcoming trip, Mr. Lee would inspect Samsung's R&D center under construction in Hanoi, as well as the company's plants there.

Samsung Vietnam expected its export turnover in 2020 to reach US$45.5 billion, down US$5.8 billion from last year.

According to Samsung's statistics, around 50% of Samsung's smartphones and tablets are produced in Vietnam and exported to 128 countries and territories, including the US, Europe, Russia and Southeast Asia. This resulted in 58% of Samsung’s smartphone sales globally come from its production facilities in Vietnam. 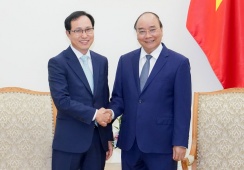