Vietnam has exceeded its role as Samsung’s global production hub and would soon become its key R&D center in the future.

“Such a positive performance was thanks to Samsung’s strict compliance to Covid-19 restriction measures set forth by the Vietnamese Government during the fourth outbreak,” stated the company in a statement.

The South Korean tech giant noted its manufacturing plants in Vietnam faced numerous difficulties from the disrupted supply chains during the second quarter of 2021, but “a comprehensive support from the Government and local authorities have swiftly addressed the issues,” it noted.

A study from market research firm Counterpoint Research noted the amount of Samsung’s foldable screen phones sold in the US rose sharply from 0.6% of all smartphone models in 2020 to 12% in 2021.

“Over 50% of Samsung’s phones sold worldwide to 128 countries and territories are produced in Vietnam,” it said.

“There is no change to Samsung’s business strategy in Vietnam despite the pandemic,” Samsung Vietnam General Director Choi Joo Ho said.

“In addition to disbursing the full amount of registered investment capital, Samsung still allocates hundreds of millions of us dollars every year to help ensure stable operation of existing plans in Vietnam,” Choi said, noting the accumulated investment capital from Samsung to Vietnam hit $18 billion as of late 2021, 2% higher than the original figure of $17.7 billion.

“Vietnam has exceeded its role as Samsung’s global production hub and would soon become our key R&D center in the future,” said Samsung Vietnam.

Samsung Vietnam is in the process of building an R&D center in the West of Hanoi with an investment capital of $220 million.

As the largest of its kind by a foreign-invested business in Vietnam and Southeast Asia, the center is scheduled to complete by late 2022 and focuses on new technologies such as AI, Big Data, or IoT. 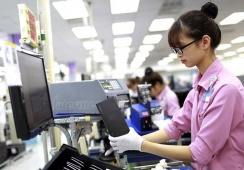 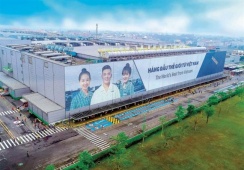 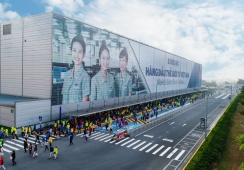