The expansion plan is part of the company’s strategy to increase production capacity in anticipation of the growing demand in the world.

Kumho Tire, a South Korean tire manufacturer, will invest US$305 million to expand its plant in My Phuoc 3 Industrial Park, in the southern province of Binh Duong, aiming to double its production capacity by 2023.

Upon the completion of the expansion in Vietnam, the company forecasts to produce at least 9.3 million tires per year.

The expansion work will begin from this third quarter and last to the first quarter of 2023 in which a new factory hall will be built in the vacant lot in Kumho compound.

The plant is part of its strategy to increase production capacity in anticipation of the growing demand in order to ensure product availability for customers and support the continued growth of partnerships in the North American market, said Il Taik Jung, President & CEO of Kumho Tire.

The company is currently operating eight manufacturing facilities located in South Korea, China, the US and Vietnam.

Earlier, China-based Jinyu Tire begun production of its first truck and bus radial (TBR) tires at its new radian tire manufacturing facility with increased capital of US$312 million in the southern province of Tay Ninh after nine months of construction. The new facility’s capacity will be up to two million tires annually.

Vietnam has its advantages, which are the availability of natural rubber resources, the increasing demand for vehicles, low-cost labor, and stable investment environment.

Many large tire companies such as Tokyo-headquartered Bridgestone, Taiwan-based Kenda Rubber, and Vietnamese Sailun chose Vietnam as a location to invest and operate their large-scale facilities here. 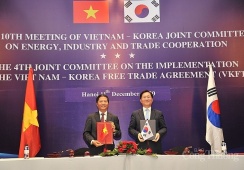