Torrential rains of 100-200mm are forecast to lash the northeastern region from October 9 afternoon to October 11, with some places recording rainfall of over 250mm.

Storm Lionrock is forecast to weaken when it hit Vietnam’s north-central coast on October 11 but is predicted to cause heavy rains to a wide swathe of the central region, according to the National Center for Hydro-Meteorological Forecasting (NCHMF).

As of 7:00 am on October 8, Lionrock, the seventh storm to strike Vietnam in 2021, was located right to the northwest of the Hoang Sa (Paracel) Islands, sustaining winds of 60-75 kilometers per hour near its center, with gusts of up to 100 kilometers per hour, the center said.

Within today, Lionrock is predicted to move north at 10 kilometers per hour and is likely to get stronger before turning west-northwest and entering the Gulf of Tonkin on October 10.

The tropical storm is then projected to change its direction to the south-southwest, losing strength and making landfall in the provinces in the south of the Red River Delta and north-central region on October 11. It is expected to bring heavy rains over the coming days.

Torrential rains of 100-200mm are forecast to lash the northeastern region from October 9 afternoon to October 11, with some places recording rainfall of over 250mm. Meanwhile, the northwestern region will experience total rainfall of 50-100mm on October 10-11.

For the central provinces from Thanh Hoa to Quang Binh, pouring rains will amount to 150-350mm over three days to October 12.

The national weather agency has issued warnings of flash floods and landslides for mountainous areas and localized flooding in lowland and riversides.

The NCHMF expected that five to seven more storms will enter Vietnam’s water this year. 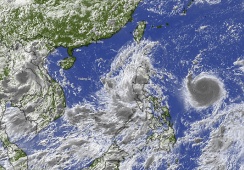 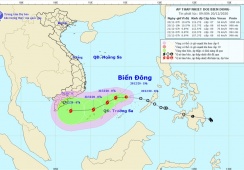