A high school in HCM City has tried organising exam in an open-air playground to prevent cheating. According to the school's headmaster, Tran Duc Thanh, the school has 530 students and they have held exams this way since 2012.

"At first we were forced to hold an exam outdoors in the school yard because our school was too small and we didn't have enough room for hundreds of students to take exams at the same time," Thanh said.

"When proposing this idea, we had asked for student opinions and most of them were in favour. We then found that this could prevent cheating so we continued despite the school’s expansion."

A photo of the latest exam held last week have been shared by the school's headmaster on Facebook.

Thanh added that students sit at separate tables which are placed some 1.2 to 1.5 metres apart. Each exams will have some 6-7 invigilators. 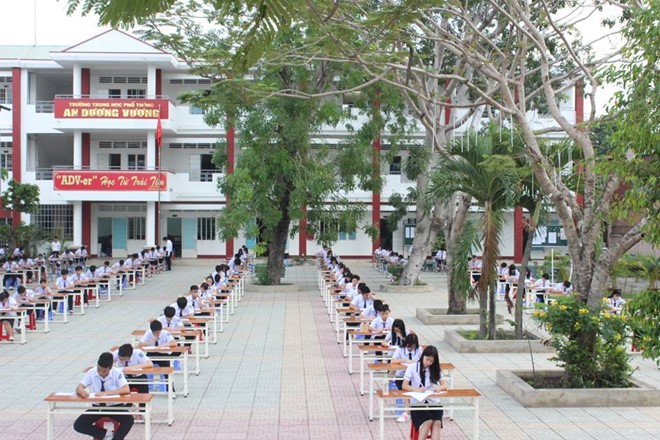 "The biggest challenge is the weather," Thanh said. "We have to follow the weather forecast carefully before holding an exam. But if it rains suddenly, the students will be moved to a large dining room to continue their exam."