The only road between West Lake and Truc Bach Lake offers the most sunset’s romantic vibes in the capital city.

Located on the banks of West Lake- the largest body of water in Hanoi, Thanh Nien Road is the most famous artery in town, with breathtaking views over these two lakes. Strolling along in the twilight is among the favorite things for locals and foreign visitors to Hanoi. However, the history and the way this road was formed remain unknown to many people.

West Lake and Truc Bach Lake were one

The original name of Thanh Nien Road was ‘Co Ngu,’ which means ‘steady maintenance. Gradually, it was mispronounced as the ‘Ancient Fish’ in Vietnamese.

Back in the day, West Lake and Truc Bach Lake were one. Since the 17th century, fishermen in the neighborhood built a narrow embankment from Yen Hoa to Yen Ninh as a shortcut, which had to be maintained yearly due to degradation and strong waves, therefore getting the name ‘steady maintenance Dyke’.

When the French ruled Hanoi, they often pronounced Vietnamese words without tone marks, gradually turning the name into the ‘Ancient fish Road’. Around the early 1960s, Co Ngu Road was expanded and renamed ‘Thanh Nien Road’ by Uncle Ho.

At this corner of the lake, there used to be a stopover palace of Lord Trinh Doanh (1720-1767), which eventually became a place where guilty or old imperial maidens were expelled. They planted mulberry, raised silkworms, and wove silk fabric for a living. The kind of smooth, beautiful thin ivory-white silk was called Truc Village Silk, and the separated part of West Lake also carried a related name: Truc Bach or Bamboo White Lake.

Over hundreds of years, these two lakes have been narrowed due to encroachment. Is it, perhaps, partly because people are more narrow-minded today than before?

Under the rule of Trinh lords (1545-1787), lotuses were planted on Truc Bach Lake, and their fragrance wafted through the area. Ngu Xa, or ‘Five Communes’ Village, was formed by the people of five bronze-casting villages in other localities who came and settled here. The smoking furnace, together with the lotus scent in the village, appeared in the rhythmic prose ‘Tung Tay Ho Phu,’ composed by Nguyen Huy Luong (1750-1808) in 1801:

Truc Bach Lake is not so vast - a person standing on one side can still catch a glimpse of people on the other. On the windy, moonlit Thanh Nien Road, we can now understand why it is considered the most romantic road in town.

It is a true pleasure to stand on Thanh Nien Road: looking to the west, we see a foggy lake in the windy sunset while glancing east, we feel the fresh breeze of Truc Bach Lake on our faces.

The line of purple orchid trees has been through many blooming seasons, while the row of phoenix flowers offers ‘sticky rice dishes’ for the glorious summer. Lake Truc Bach should be restored to its original purity and openness from generations ago.

Indeed, we will have an occasion to stroll around Truc Bach Lake, enter Ngu Xa Peninsula, visit the ancient temples and Buddha statues, and feel ingenious rhythmic prose echo inside us.

It feels like we are freed from greed, ridiculousness, and pollution - pollution of the lake surface, the human soul, nature, and history... like Truc Bach Lake has suffered so far.

Only the fact that a US bomber pilot got caught on Truc Bach Lake is enough for the area to be preserved as a sacred relic, not to mention its existence for thousands of years with Thang Long - Hanoi and many generations as a permanent memento of a charming capital...

Quan Thanh Temple was built during the reign of King Ly Thai To (1010-1028). In particular, the temple has a black copper statue of Saint Tran Vu, 4 meters high and weighing 3,600 kilos, cast by Ngu Xa Village’s craftsmen in 1677.

Meanwhile, on the east shore sits Chau Long Pagoda, associated with a princess named Khiet Co of the Tran royal family. Perched on a mountain shaped like a dragon releasing pearls, the pagoda was named ‘Chau Long’ (‘Pearl Dragon’), built under the Ly and Tran dynasties and rebuilt in the 19th century. Chau Long Pagoda is a famous, valuable sculptural building that has been listed by the State as a Cultural-Artistic Relic.

In addition, on the north shore of the lake lies Than Quang Pagoda, housing the most giant bronze block statue of Buddha in Vietnam, cast from 1949 to 1952. The statue, 4 meters high and weighing 14 tons, is a precious artwork in Vietnam and the world.

Surrounded by Truc Bach Lake’s calm, clear water is two islands, of which the larger one near the eastern shore is called Ngu Xa Island or Ngu Xa Village. As seniors here often tell their descendants, around the early 17th century, five men from five villages in Thuan Thanh District, Bac Ninh Province, traveled to the capital to find work. They met each other in the grass-covered land east of Truc Bach Lake, and together they set up tents and bronze melting furnaces. Gradually, they took their families here to live, forming a bronze casting village called Ngu Xa Village or Nam Trang Village. 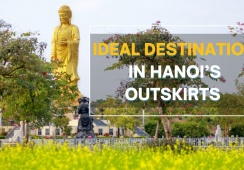