Since the meaningful historical relics were unveiled, the entire ruins of the Thang Long Imperial Citadel have been well preserved and introduced to the public.

Despite lots of efforts exerted by local archaeologists, historians and experts during the past ten years, ground has not been broken for the restoration of the main palace of the Thang Long Imperial Citadel.

Although being the seat of prosperous imperial courts under the Ly, Tran and early Le dynasties during the 11th to 15th centuries, the Thang Long Imperial Citadel could only self-prove its existence and splendor just ten years ago, thanks to an unexpected discovery.

Until before 2002, the present Thang Long Imperial Citadel at No 18 Hoang Dieu street was only a deserted area occupied by military units. This spacious piece of land, where the National Assembly House and a new Ba Dinh Hall would be built, Assoc.Prof. Dr. Tran Duc Cuong, president of the Vietnam Association of Historical Sciences (VAHS) said.

By law, before the erection of any building in the land, geological surveys must be carried out, and after extensive excavations, important archaeological sites have been unearthed, marking a major turning point for the proof of the existence of an ancient citadel here.

Right after that, in December 2002, the largest archaeological excavation in Vietnam ever was carried out. Initially, from some 4-sqm-exploration-pits, archaeologists had to enlarge each pit into 100sqm each and there were 20 pits were exploited in a area of 48,000sqm so far.

Since the meaningful historical relics were unveiled, the entire ruins of the Thang Long Imperial Citadel at No.18 Hoang Dieu street have been well preserved, introduced to the public and recognized by UNESCO as a cultural heritage of mankind in 2010. Other small-scaled explorations are still carried out yearly at the Thang Long Imperial Citadel archaeology to seek more ancient cultural values hidden deep underground.

On November 23, 2020, in order to celebrate the 10th anniversary of UNESCO's recognition on the Thang Long Imperial Citadel historical relic as heritage of the mankind, an international scientific seminar entitled "Ten years of researching, preserving and promoting the value of the World Heritage of the Thang Long Imperial Citadel" was jointly organized by the Hanoi People's Committee and the National Committee of UNESCO Vietnam to evaluate archaeological excavation and conservation of the imperial citadel.

Speaking at the seminar, Ms. Ngo Thi Thanh Hang, member of the Party Central Committee, former standing deputy secretary of the Hanoi Party Committee, shared her memory about the emotional moment when the Thang Long Imperial Citadel was recognized by UNESCO as the 900th world's heritage of mankind at its 34th session, which took placed in August 2010.

As some historical records say, over 10 centuries ago, when moving the capital from Hoa Lu (Ninh Binh) to Dai La Citadel, King Ly Cong Uan (Ly Thai To) built the Thang Long Citadel right on the foundation of old Dai La Citadel. Thang Long Citadel consisted of three layers of wall: the outer wall was called La Thanh or Citadel, the middle one (in the middle) was Imperial Citadel - home to the residence and workplace of the court officials and the inner most wall was Forbidden Purple City - the place reserved only for the royal family.

The ancient Thang Long Citadel and Hanoi today was the witness of numerous upheavals of the feudal dynasties over a thousand years. Though wars destroyed and buried many artistic and architectural works, a large number of traces of the Thang Long Imperial Citadel have still been found so far.

Over the past 10 years since then, Hanoi has only unearthed nearly a third of the area covering the Imperial City and the Forbidden Purple City. There are still many underground secrets that have not yet been discovered.

According to the book of “Dai Viet su ky toan thu” (Complete Annals of Đại Việt), works on Kinh Thien palace started in 1428 under the reign of King Le Thai To and completed under the reign of King Le Thanh Tong. King Le Thai To was crowned in 1428 at the Kinh Thien Palace. Later, it turned to be a palace of great significance where the court held the most solemn rituals, welcomed foreign emissaries and discussed affairs of state.

During the French invasion of North Vietnam in the late 19th century, French colonial forces destroyed the Kinh Thien palace and built an artillery barrack on its foundation. After October 10, 1954, when the Vietnamese army took over the capital, this area became the headquarters of the Ministry of Defense.

"The Kinh Thien Palace is considered as the central architecture of the Forbidden Purple City of the Thang Long Imperial Citadel,” said Dr. Nguyen Van Son, chairman of the Hanoi History Association, “it was the highest symbol of national power Dai Viet in the Le dynasty. The restoration of the Kinh Thien Palace is an urgent task which has a profound cultural and historical significance and value, not only for Thang Long - Hanoi but for the whole country."

“Archaeological discoveries in the past at the Thang Long Imperial Citadel have found a great deal of authentic evidence about the architecture of the Kinh Thien palace in the Ly dynasty, with architectural features similar to those built at the same time in China, Japan and Korea,” said Assoc.Prof. Dr. Bui Minh Tri, director of the Citadel Research Institute under the Vietnam Academy of Social Sciences.

During the past 10 years, Vietnamese scientists and archaeologists have devoted many efforts to researching the Kinh Thien Palace in order to reconstruct the most important historical architecture of the Thang Long Imperial Citadel. However, until now, the restoration work has not yet been carried out. The scale, specific location, and architecture of the Kinh Thien Palace are still unknown to local scientists. 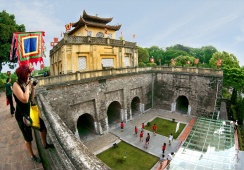 Snapshots of 10th anniversary of UNESCO's recognition of Imperial Citadel