The 17th “Hanoi in My Heart” photo exhibition opens

To celebrate the 68th anniversary of the Capital City's Liberation, the 17th "Hanoi in My Heart" shows the beauty of Hanoi and its people's efforts to contain epidemics and maintain their socio-economic growth.

The Kinh te & Do thi (Economic & Urban) Newspaper and the Hanoi Elderly Photographers Club on October 7 opened the 17th "Hanoi in My Heart" photography exhibition to mark the 68th anniversary of the Capital's Liberation Day, which falls on October 10.

The annual exhibition, underway at the Hanoi Temple of Literature, will provide an insight into the creative city of Hanoi, foster a love of the capital city and a desire for development in every Hanoian, and boost their creativity to drive Hanoi's growth.

The "Cultural Colors of the Capital" showcases 80 photos capturing moments and views of Hanoi as the city bounces back vigorously in the post-pandemic stage.

As a member of UNESCO's Creative Cities Network, which conceives the cultural industry as a leading economic sector, the exhibition demonstrates Hanoi's determination to become the capital of creativity in Southeast Asia.

The 80 photos are classified into three categories with different topics, which are “Hanoi – the Creative City”, “Resurrection of Cultural and Artistic Activities”, and “Hanoi – a Major Tourism Hub of the Country”.

“The 80 photos displayed in the exhibition are taken by 30 members of the Hanoi Elderly Photographers Club and reporters of the Kinh te & Do thi Newspaper for years,” the club chairman Nguyen Van Phuc said.

“We can see the love of Hanoi shown by photographers who have lived and worked in the city for decades,” he said.

“Through the photos, the public may see how much Hanoi has recovered and developed from the pandemic.”
Photographer Tran Quang Loi of the Hanoi Association of Photographic Artists said that the “Hanoi in My Heart” photo exhibition is a highly significant cultural event in the capital city.

The photos have captured unforgettable moments of the capital city in all fields, especially the preservation of cultural characteristics of Hanoians, he said.

"The photos captured the sights and people of Hanoi in the transformation stage. The photo works praise the local people for their contributions in executing the dual goals of ensuring disease prevention and boosting socio-economic development." 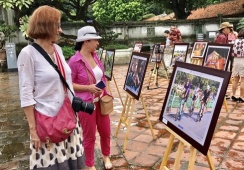