The “Echo of the Vow to Death” honors Hanoians and army

Although suffering heavy human and material losses during the long and arduous resistance days against French troops, the capital city and the country attained the final victory.

An online exhibition entitled “Echo of the Vow to Death” will be available from December 16 at the website of Thang Long Imperial Citadel of http://trungbayonline.hoangthanhthanglong.vn.

Dividing into three sections called “Hang by a thread”, “Hanoi - Echo of the Vow to Death” and “Marching towards Hanoi”, the online exhibition praised the heroic and resilient capital people in the struggle for independence during National Resistance War against France from 1946 to 1954.

The exhibit’s photos, historical documents, and objects highlight the glorious fighting spirit of the Vietnamese people and army during the first days of the war.

On the evening of the historical day 75 years ago, the Vietnamese artillery in Lang Fortress pounded targets in the inner city, initiating the resistance war. The next morning, the Voice of Vietnam broadcast the President’s appeal, urging the people to resist the French attempt of restoring colonial rule in the country.

In response to Ho Chi Minh’s call, the Hanoi’s army men and people fought for 60 days and nights, succeeding in containing the French march and foiling their plans to take over major offices of the Vietnamese government.

The displayed items and photos at the exhibition highlight the courage of the patriots in the capital who were willing to die for the Fatherland in the cause of national liberation.

The achievements over nine years of war culminated in the Dien Bien Phu campaign victory over the French, laying the foundation for national liberation and reunification under the leadership of the Communist Party later. 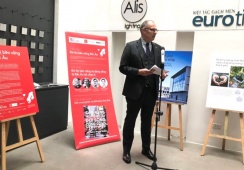 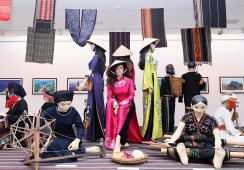 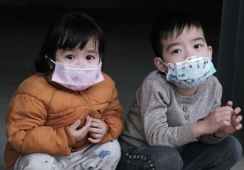