Hanoi is famous for its green tree lines and calm lakes, but the classic charm of a thousand-year-old city is yellow - the color of old houses and memories.

There are times when I wonder, what is the typical color of Hanoi streets? White, green, yellow, or red? I have recently discovered that when viewed from above, Hanoi is almost entirely red, since most of the roofs are of this color. People love the color of tiles, which brown clay characteristically turns into when baked at high temperatures, and still prefer that color on alternative materials like steel roofing sheets.

But that’s red at the top and very few get a chance to have a bird’s eye view of Hanoi.

Meanwhile, yellow is closer and more visible, typically shining from down below to the top of old buildings and mansions, reminiscent of the city’s distant past.

The iconic buildings of Hanoi are all yellow. It is the color of the elegant Hanoi Opera House on Trang Tien Street, the quiet Hanoi University of Pharmacy on Le Thanh Tong Street, the majestic Presidential Palace in Ba Dinh Square, and the villas on such streets as Phan Dinh Phung, Tran Hung Dao, Tran Phu and Ly Thuong Kiet.

Attractions like the Opera House as well as the mansions have been repainted and renovated, but only the interiors are adjusted, with modern equipment installed, while the walls are usually preserved in yellow.

The renovation of well-known buildings even sparks public debate as to whether the new paint should be darker or lighter yellow compared to the old one. Yellow has become the classic color of Hanoi streets.

The yellow of old houses is often interspersed with the green of leaves and windows. Yellow is the typical color of the walls, whereas green is characteristic of windows. Yellow walls-green windows practically become the epitome of color schemes, shaping the elegant and noble beauty of Hanoi’s classic villas.

I found out why people love yellow. It has the advantage of being one of the most durable colors in the harsh conditions of the tropics: hot, humid and rainy. That is, walls painted or whitewashed yellow will fade less than others. Yellow is also the color of nobility and luxury.

Imperial utensils were often yellow, while gold is the most loved metal, taken as a measure of the ultimate value: ‘gold standard’, ‘golden words’, ‘silence is golden’, ‘a good reputation is more precious than gold, and so on.

From time to time, I roam around the Old Quarter and observe houses on roadsides. Even though those structures are now much more diverse with various colors and materials, those in yellow are still the predominant and standout ones.

Strolling through Chau Long Street, I found that the old yellow houses are still the most attractive locations. Cua Bac Church is surrounded by ancient dragon plum trees on Phan Dinh Phung Street, yet its distinctive yellow color and massive architecture are recognizable from afar.

Chu Van An High School still has a profound ancient look thanks to the old yellow of the past, whether seen from Nguyen Dinh Thi Street by the West Lake or the busy Thuy Khue Street. Hanoi streets have changed a lot, if you slowly pass by an old yellow house, it is still a color of memories, an attraction on the journey to travel and explore the city.

Sometimes in Hanoi, we will encounter really empty streets. Oh, how could there be such abandoned places in this big and bustling city? As the capital, the political, economic and cultural hub, it has to be full of people and noises everywhere, but that’s not true.

Along these surprising streets, you can see a faded yellow over time. I have passed through Phan Huy Ich Street many times, always wondering about the old yellow and identical houses. If it were not this color of the past, it might not evoke such a feeling - a bit of distant sadness, as in Lady of the Thanh Quan District Chief’s poetry. That’s right, this female poet once visited the yellow-walled Tran Bac/Tran Quoc Pagoda, one of the oldest in the capital, and wrote a poem about this place:

For the old country, bitter nostalgia

The bell of time steadily chiming

Where are they, old scenes and old people?

The bald-headed, how nonchalant!”

And not only Tran Quoc, other pagodas around Hanoi streets and especially the West Lake all have yellow walls as well. Westerners like yellow due to its durability and elegance, and oriental Buddhists also prefer the color: yellow Buddha statues, yellow wall paint, yellow costumes on important occasions…

At the time seasons change, Hanoi streets are also dyed yellow by tree leaves. Passing through Phan Dinh Phung and Tran Phu streets, people occasionally come across showers of Indochina dragonplum leaves. Light yellow leaves fall down fluttering, and coincidentally, there are many yellow villas on these two streets. Particularly in Phan Dinh Phung Street, as the rows of ancient trees shade the whole street, sometimes there are yellow sunbeams shining on the road or the facades of the classic mansions.

Not only the typical French architecture, old houses of Hanoians around downtown areas such as Hang Ngang, Hang Dao and Hang Chieu streets are also painted in this color. I have no exact figure, but through direct experience, I believe that the yellow of houses and buildings is predominant here in the capital.

* Born and raised in Quang Ninh, but writer Uong Trieu (aka Nguyen Xuan Ban born in 1977) has a great love for Hanoi, the place where he and his family has been living in.

He has spent a lot of time and effort learning about Hanoi’s history and “telling” it to his readers in a very personal way: charming and extremely witty. The Hanoi Times would like to introduce a piece of Uong Trieu's romantic writings.

TAG: The beauty of Hanoi; what\'s the typical color of Hanoi The Yellows of Hanoi; classic charm of Hanoi- the thousand-year-old capital of Vietnam is yellow 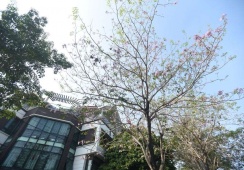 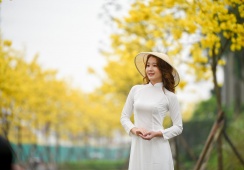