The storm is forecast to cause heavy downpours and rough seas in the northern region, including Hanoi.

A tropical low depression strengthened into a tropical storm named Mulan hit the northern coast of Vietnam early on August 11 morning, causing heavy downpours and rough seas in the northern region, including Hanoi, in the coming days.

The storm, the second tropical storm to have formed in the East Sea this year, is forecast to enter the Gulf of Tonkin on the night of August 10 and will enter Vietnamese waters shortly, according to the National Center for Hydrometeorological Forecasting (NCHMF).

The coast between Quang Ninh and its neighboring port city of Haiphong will see winds of 40-60 kph from Wednesday night and through Thursday.

The entire northern region and the two north-central provinces of Thanh Hoa and Nghe An will see rainfall of 100-200 mm, with certain areas recording levels up to 250 mm.

Heavy rains would continue to batter the north on Friday, the center said, forecasting that it would weaken into a tropical depression before becoming a low-pressure area that will directly affect Vietnam’s northern provinces.

Powerful winds are also expected along the coast between Quang Ninh and Ninh Binh Provinces in northern Vietnam. Meanwhile, a strong southwest monsoon is forecast to cause rough seas and high waves in the central and southern sections of the East Sea.

Vietnam should expect 10-12 storms and low-pressure areas in the East Sea this year, with around half making landfall. The first was Chaba which hit the country in July. 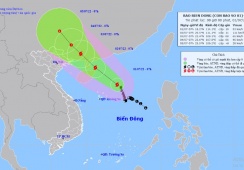