Crown Prince Frederik of Denmark expressed his joy at returning to Vietnam, a country he and the Danish Royal Family have a special affection for.

The Crown Prince congratulated Vietnam's achievements in socio-economic development and global integration over the years at a meeting with State President Nguyen Xuan Phuc today [November 1] as part of the visit of him and Danish Crown Princess Mary Elizabeth to Vietnam.

In the context of a robust, comprehensive partnership between the two countries, Frederik noted that many large Danish companies are accompanying him on this trip and are looking to cooperate with their Vietnamese counterparts, especially in green growth, renewable energy, and efficient energy utilization.

He shared the Vietnamese Government’s view on sustainable development and expressed his impression of the country’s efforts to realize net zero carbon emissions by 2050.

Frederik stressed the huge potential in cooperation between the two countries in the green energy transition and hoped the two could soon establish a green strategic partnership to strengthen bilateral cooperation further.

For his part, State President Nguyen Xuan Phuc welcomed the visit of the Danish Crown Prince and Crown Princess to Vietnam.

Phuc highlighted the long-standing Vietnam-Denmark relations over the years and appreciated the special affection from the Danish Royal Family and the Government towards the people of Vietnam during the nation’s construction and development process.

Denmark is Vietnam’s major economic partner in Europe, with a bilateral trade turnover in 2021 of nearly US$600 million.

The country has moved into third place among the most prominent European investors in Vietnam in 2022 with the $1 billion Lego factory, bringing Denmark's total investment capital in Vietnam to $1.78 billion.

Phuc expected both countries would continue to strengthen cooperation and called on the Royal Family and the Danish Government to contribute to the deepening of the Vietnam-Denmark comprehensive partnership.

He requested Denmark to support Vietnam in technology and finance and provide expertise to realize Vietnam's commitments in climate change, and encouraged Danish companies to invest in Vietnam in fields of their strong advantage and capitalize on the EU-Vietnam Free Trade Agreement (EVFTA).

Both sides have also agreed to expand cooperation in education training and cultural and tourism exchanges to foster mutual understanding between the two peoples, eventually contributing to the strong partnership between the two countries. 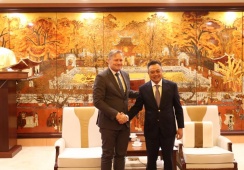