Sharing the river's hydrological data throughout the year is believed to be one of the most essential measures for the cooperation.

Vietnam has called for an open and long-term cooperation mechanism for the Mekong-Lancang river, which originates from China.

Cooperation for the use and management of Mekong water in the long run requires the regional sharing of entire year hydrological data, improved warning and forecast capacity, and better cooperation with the Mekong River Commission and international partners, Vietnam’s Prime Miniser Nguyen Xuan Phuc made the statement at the third Mekong-Lancang Cooperation Leaders’ Meeting on August 24.

The cooperation must be built on trust and sincere, frank, and friendly relationship on the basis of equality, consensus, mutual benefit, people-centered principles, and respect for international law, Phuc said at the event.

Sharing the same ideas, other leaders agreed to boost the sharing of hydrological data, conduct joint researches and policy dialogues, control flooding and drought, and seek solutions for the sustainable development of water resources in the lower Mekong basin.

According to the Vietnamese government’s website, China’s PM Li Keqiang said Beijing is willing to share hydrological data throughout the year of the Lancang river (the section of the Mekong river that flows through China).

Statistics by the Mekong River Commission, the Mekong river originates from the Tibetan plateau and runs through six countries: China, Myanmar, Thailand, Laos, Cambodia, and Vietnam. With 4,350 kilometers long, it is the seventh longest river in Asia and the 10th longest in the world. The average mean discharge for the Greater Mekong Basin is about 460 km3 of water annually and approximately 65 million people live in the Lower Mekong Basin.

The Mekong supplies communities within the basin with up to 80% of their animal protein needs. The lifeblood of the region is increasingly threatened by climate change and ill-conceived development schemes.

The meeting under the theme of “Enhancing Partnership for Shared Prosperity” ended with the Vientiane Declaration that focuses on politics and security, economics, and socio-culture.

This is followed by (1) more dialogues and exchange meetings, and settlement of non-traditional security issues; (2) boosting partnership on economic and sustainable development cooperation with a focus on infrastructure connection for increased trade, investment, and production; (3) enhancing partnership on social, cultural and people-to-people exchanges; and (4) promoting partnership on Mekong-Lancang Cooperation (MLC) mechanism.

In addition, the countries welcomed China’s announcement of the Lancang-Mekong Cooperation (LMC) Special Fund for Public Health within the framework of the LMC Special Fund to support public health cooperation projects of the six countries in the future. 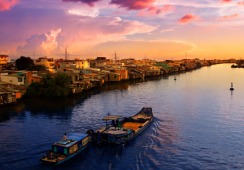