The match on the first day of the Lunar calendar is special for both Vietnam and China, two of the few countries in the world celebrating the Lunar New Year.

Vietnam’s national team is expected to bag high results at the match versus China in the third round of the 2022 FIFA World Cup qualification.

The Golden Dragons hoped they would make the Tet holiday (the Lunar New Year) a special occasion for home supporters as the match is slated for the first day of the new year, captain Do Hung Dung said on January 18.

All players hope for in-person support as it’s a great motivation for the team, said the newly-appointed captain.

The match will take place at My Dinh National Stadium, Hanoi with an estimated audience of 20,000 football fans.

In the first leg of the third round, Vietnam lost 2-3 to China in the last minutes at the match held in the United Arab Emirates (UAE) on October 7, 2021.

In 2021, Vietnam made history when it reached the third round of the World Cup qualifying in Asia for the first time. It competes with 11 teams namely Australia, Iran, Saudi Arabia, Japan, UAE, South Korea, Syria, China, Iraq, Oman, and Lebanon.

Vietnam is the only team in Southeast Asia that entered the third round of the World Cup.

Coming on the back of a quarterfinal appearance in the 2019 AFC Asian Cup, the Southeast Asian champions did the double over regional rivals Malaysia and Indonesia in the second round.

They were unbeaten for 35 matches against Southeast Asian national teams for the past three years.

Do Hung Dung is a midfielder playing for Hanoi FC. He is the mainstay of Vietnam, playing all the matches on the journey to become the AFF Cup 2018 champions and win the 2019 SEA Games gold medal.

“I myself or anyone with this responsibility always try and motivate my teammates to work hard in the next matches,” Dung said when being asked about the promotion to captain. 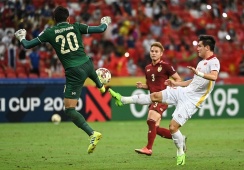