Under the new regulation, state-owned commercial banks where the state holds more than 50% can now be able to raise their registered capital to maintain the government control.

The Vietnamese government has recently issued decree No.121/2020/ND-CP in replacement of the Decree No.91/2015/ND-CP, which regulates the state capital invested in state-owned enterprises and management of state capital and assets at enterprises.

This is particularly important if they are to qualify for requirements on capital adequacy ratio (CAR) under Basel II standards, laying the foundation for further growth in years to come.

As of August, registered capital of four major state-owned commercial banks, namely Agribank Vietcombank, BIDV and Vietinbank make up 23.1% of the total in the banking system, representing an increase of 6.3% against late 2016.

Meanwhile, that of joint-stock commercial banks accounts for 46.1% of the total, up 44.4% during the period.

A representative of Agribank said for many years, the lack of investment from the state means the growth rate of registered capital remained lower than that of total assets, resulting in a decline in the bank's CAR, which now stands at 9.2%, slightly above the minimum requirement of 9% for Basel II.

According to the bank, in case it is not allocated a full amount of VND3.5 trillion (US$150.6 million) to raise its registered capital this year, Agribank’s credit growth could be around 4.5 – 5%.

Before the issuance of decree No.121/2020/ND-CP, state-run commercial banks were looking for ways to raise their registered capital and meet the market’s credit demand.

Notably, BIDV sold a 15% stake to South Korea’s KEB Hana Bank in deal worth VND20.3 trillion (US$875 million) in late 2019. As a wholly state-owned commercial bank, Agribank could only seek an increase in registered capital via financing from state budget, and is scheduled to receive around VND3.5 trillion (US$150.6 million) this year.

Meanwhile, Vietinbank has not increased its registered capital since 2014, therefore, right after the issuance of Decree No.121, the bank is in the process of applying for a higher registered capital in an earliest time possible and meet the minimum requirement in Basel II standards.

Banking expert Nguyen Tri Hieu said a declining profit amid growing bad debt would significantly impact its CAR. Without being allocated sufficient fund to raise registered capital, all four banks would struggle for their responsibility of being a source for credit demand, he noted.

Under the government’s instruction, state-owned commercial banks have to foregone around 40% of their profit to cut interest rates. Financial statements of four banks in the third quarter have also reflected declines in profit and higher bad debts as a result.

Therefore, higher registered capital in these banks would help lower interest rates and contribute to higher credit growth in the final months of the year.

A report from SSI securities company said insufficient registered capital remains a challenge in the banking sector, especially with growing bad debts in banks. For every 1% growth in a bank's bad debt, its CAR would decline by 40 – 80 basis points, it noted.

For banks with CAR of over 11%, the pressure for increasing registered capital would not be too high in 2021 in case bad debt rises by 1 – 2 percentage points. However, it is a clear opposite situation for BIDV, Vietinbank and Vietcombank in 2021, stated SSI report. 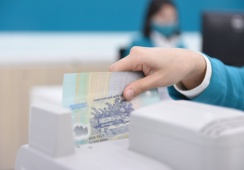 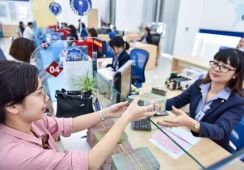