Vietnam gives high priority to promoting renewable energy during its transition process to a low-carbon economy.

Vietnam gives high priority to promoting renewable energy and green projects, in turn gradually reducing the number of coal-fired plants in the country.

Head of the Party Central Committee’s Economic Commission Tran Tuan Anh made the view in a meeting with Minister of State for Trade Policy in the Department for International Trade of the UK Greg Hands on June 23.

He called for the UK to continue assisting Vietnam in promoting renewable energy and its transition process to a low-carbon economy.

Anh said that Vietnam and the UK had celebrated the 10th anniversary of the establishment of strategic partnership in 2020. “Along with the issuance of a joint statement on the vision for development in the next decade and the signing of a bilateral free trade agreement, the partnership has laid the foundation for both countries to continue realizing the huge cooperation potential, especially in trade, economy and investment.”

Congratulating the UK as one of the countries with the highest Covid-19 vaccination rate in Europe and globally, Anh hoped the UK government would aid Vietnam in the vaccination process, including the transfer of vaccine production technology and waiving patent.

The UK minister also expressed thanks for Vietnam’s support in the UK process of accession to the Comprehensive and Progressive Agreement for Trans-Pacific Partnership (CPTPP). 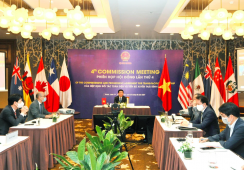 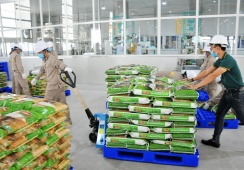