Vietnam has leapfrogged Bangladesh to become the world’s second-largest exporter of clothing in 2020 with a turnover of US$29 billion, down 7% year-on-year, according to the World Trade Organization.

Under WTO’s World Trade Statistical Review 2021, Vietnam stood behind China with exports of $142 billion, as the former’s ready-made-garment gained 6.4% of the world market share, a significant improvement from just 2.9% ten years ago.

While both Vietnam and Bangladesh experienced a decline in garment export turnover in 2020 as a result of the Covid-19 pandemic, Bangladesh’s pace of contraction was much larger at 15% to $28 billion in 2020, in turn shrinking its global market share to 6.3%.

Bangladesh had kept its second place in WTO’s ranking since 2010.

The Dhaka Tribune noted Bangladesh losing its position to Vietnam was due to the failure in maintaining strict compliance set by international retailers and brands, as well as the ability to diversify goods at a competitive price.

Another factor cited by the newspaper is the signing of the EU – Vietnam Free Trade Agreement (EVFTA), putting the country in a position to enjoy preferential treatment from the world’s largest trading bloc.

“Globally, Bangladesh is a popular destination for low-end manufacturing items at the cheapest rate while Vietnam produces high-end apparel with a strong backward linkage industry and educated workforce,” it noted.

Prof Mustafizur Rahman, a member of the Center for Bangladesh Policy Dialogue, told the Dhaka Tribune that while the pandemic has played a part in lowering apparel exports, the main issue is that Vietnam stays far ahead in labor productivity, capital productivity, and diversification.

Giving another perspective on the rise of Vietnam’s garment industry, the fashionunited.de suggested the pandemic outbreak prompted multinationals to reconsider their dependence on China.

Vietnam, in this regard, has emerged as an attractive alternative compared to India or Bangladesh with a better network of supply chains, noted the website.

Meanwhile, as the Vietnamese dong is kept stable in relations with the US dollar, there are hardly any price fluctuations when the market falls.

The site also pointed to the close proximity between Vietnam and China, which makes it easier for companies to source raw materials and machinery for production.

“Some brands moving out of China will want to mitigate risk and stay close by diversifying their supply chains,” it noted.

According to the fashionunited.de, Vietnam could provide more political stability compared to Bangladesh and India, not to mention its people having better access to higher quality education infrastructure and healthcare.

In the first seven months of this year, Vietnam’s textile exports rose by 14% year-on-year to $18.6 billion.

The Ministry of Industry and Trade predicted the local textile industry may hit the export target of $39 billion this year as demands are growing from the country’s main export markets such as the US or EU. 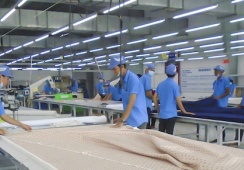